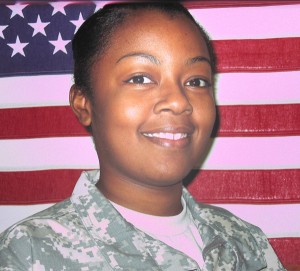 Bouie, a human resource specialist with two years of military service, is regularly assigned to the 912th Human Resources Company, based out of Tallahassee, Fla. While deployed, she was awarded three Army Achievement Medals and received the NATO Award. Bouie enlisted in the Army in December 2008.

Operation Enduring Freedom is the official name given to anti-terrorism military operations involving U.S. troops and allied coalition partners. Active duty and reserve component members from all branches of the U.S. armed forces have been deployed to support the war against global terrorism outside the borders of the United States. U.S. troops serve in South, Southwest and Central Asia, the Arabian peninsula, the Horn of Africa, islands in the Pacific, and Europe.

She said she is relieved to be back in the states as there were continuous mortar attacks on her base Christmas day and three days after in which three personnel and a civilian were killed. Bouie is the third member of her family from Attapulgus to serve in the Middle East. Her father, Patrick, was in the infantry and an older sister was in military intelligence. Both served in Baghdad, Iraq during 2003-2004.

She is the daughter of Patrick and Margaret Bouie of Attapulgus, Ga. She has four years left on her enlistment and will be resuming her studies to obtain a degree in criminal justice. She is a 2007 graduate of Bainbridge High School.

Army Reserve Spc. Lequion O. Martin is returning to the United States after a deployment to Iraq serving in support... read more