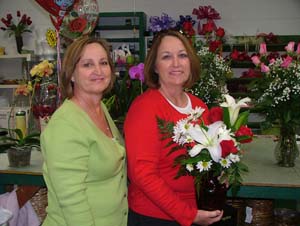 FLOWERS FOR VALENTINE’S DAY are being prepared by Jeannie Alday, left, and Marsha Black at Marlene’s Florist.

Valentine’s Day is unquestionably the biggest day of the year in the florist industry, yet Marlene Lamb of Marlene’s Florist is going to miss it for the first time in more than 40 years.

This week she had hip replacement surgery, and is doing fine according to her daughter, Marsha Black, but she will miss all the fun and excitement of Valentine’s Day 2011.

In a way, her presence and help will still be felt, as she began making and tying the bows for the arrangements in January, from her home.

Meanwhile, Black and her assistant, Jeannie Alday, have the business well in hand. They are busily filling a basket full of orders, and preparing arrangements to be picked up and delivered on Valentine’s Day.

Black said the biggest demand is for roses, although other arrangements are made with tropicals, such as orchids. They also have bromeliads and other spring cut flower arrangements, but “People want roses on Valentine’s Day,” exclaimed Black.

Her mother, Marlene, has worked in the florist industry since 1960 and started her own shop in 1972. She studied floral design at Abraham Baldwin Agriculture College and is a Georgia certified professional florist. She has won multiple awards for her design work, including Georgia State Florist Association Designer of the Year in 2004 and 2010. She was District V president from 2004-2006.

She has passed much of that knowledge and talent along to her daughter, who has been in the business since 1994.

Marlene recalls the early years when there was not that much demand in Bainbridge on Valentine’s Day. The custom was more popular in Tallahassee and bigger towns with colleges.

“We began to grow each year, and with the coming of the industrial park, American Lighting, and opening of the Bainbridge Mall, the business really took off,” she said. “The year it really mushroomed was with the new high school on College Street and the middle school. We delivered to the schools and the high school had the most flowers. They were wall to wall in the offices, and spilling out into the hallways.”

For the years after that the schools and florists were both better organized and prepared to deal with the deliveries.

Now, school deliveries are no longer allowed, in deference to those students who were disappointed at not receiving flowers.

She remembers times when flowers were delivered in the workplace and the co-workers would start calling their husbands or boy friends and ask where their flowers were. Needless to say, some of them would also receive flowers.

“We would deliver them with a smile and say so sorry we didn’t get to them earlier. The men were out of the dog house and the women were none the wiser,” she explains.

“It is a big pleasure to deliver flowers on any day, but especially on Valentine’s Day to see a big smile of surprise and joy on their faces,” said Marlene, who adds, “By the way, men receive flowers too.”

Rice was a Bearcat football great

KEN RICE will be inducted into the first class of the Decatur County Sports Hall of Fame. Editor’s Note: The... read more