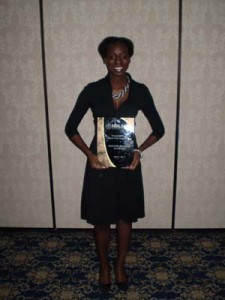 MELLORI LUMPKIN of Bainbridge and a team of three other law school students recently won the western region championship of the Thurgood Marshall Mock Trial Competition in Las Vegas. The team will now advance to the national competition in Houston, Texas, on March 9-13.

By winning all of their trials at the University of Nevada, Lumpkin and her team advanced to the national competition to be held in Houston, Texas, on March 9-13.

The National Black Law Students’ Association established the Thurgood Marshall Competition in 2002 “in order to develop future lawyers with strong courtroom skills as they prepare for various components of a trial. Those who participate will gain heightened skills by implementing rules of evidence, criminal and civil procedure, teamwork, research, writing, analytical skills and advocacy.”

The team prepared rigorously for months leading up to the competition. Team member Lumpkin notes, “Any aspiring trial lawyer welcomes the opportunity to compete with the best of the best and showcase his or her advocacy skills. Having that work and preparation recognized in this form is more than one could ever ask for, but now the work begins for Houston.”

Lumpkin is a second year law student at the University of California, Berkeley, and the daughter of Melvin and Linda B. Lumpkin of Bainbridge.