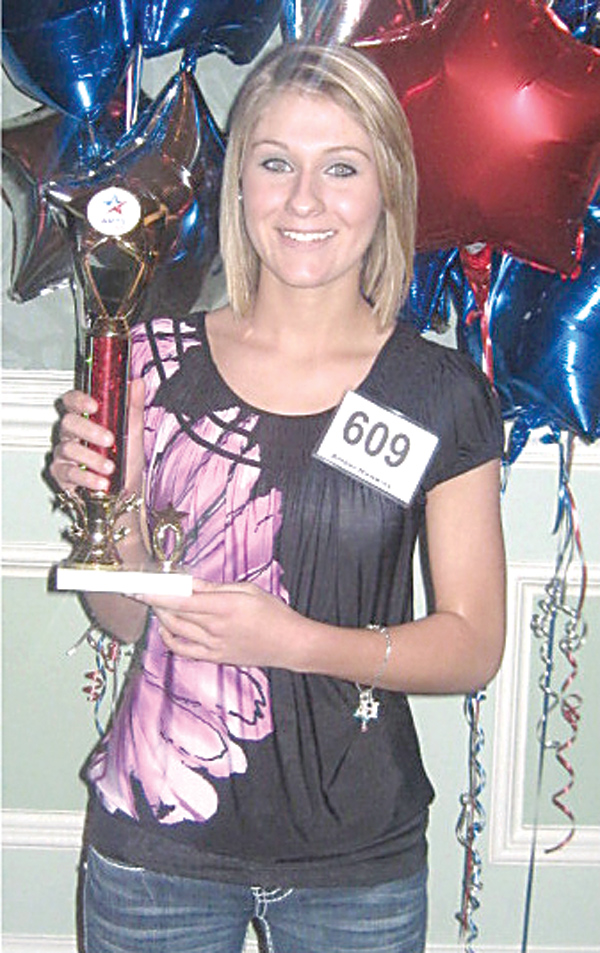 Amber Hawkins brought home a first-place trophy in singing at the ARTS showcase held at The Omni Orlando Resort at Champions Gate, Fla., on Dec. 15.

Hawkins was also selected for the variety talent show that included top performers in Broadway singing, acting, dancing and TV commercials. Hawkins and her family experienced an exciting week meeting talent agents, casting directors, and modeling agents from all over the United States and abroad. Special guests were Chad Broskey, actor on “Life of Zack” and “Cody & Read It and Weep,” and Abbie Cobb, actor on Disney’s “Wizards of Waverly Place” and “90210.”

Hawkins was overwhelmed when she got a call the following morning indicating interest from agents and comments given from judges on her performance and talent.

“We cried and could not believe how fast things were buzzing for Amber,” said her mother, Cathy Hawkins. “Amber made a lot of new friends from all over the country. We shared the excitement with other contestants on their performances that are taking them places of their dreams. She received call-backs from modeling and photography agents that plan to assist in her future endeavors.”

Amber was picked up for her singing and talent performance by Eddie Wenrick, CEO, of Hitlab.com/Wenrick Entertainment Group, general manager of Epic Records, director of Columbia Records and senior vice president at CMT, executive manager of Country Music Artists and Legends of today, in a career that spans more than 40 years experience in the music and TV industry.

Amber is preparing for Nashville, Tenn., to make her first CD album tentatively scheduled to be released in the spring. She already has a schedule of things to prepare for in the upcoming months. Hawkins’ talent/model agent, Ashley Kicklighter, is working with Wenrick and Hawkins on schedules and creating her webpage and the presale of her first CD.

Hawkins, in a prepared news release, said she and her family would like to thank everyone that has supported her to make this ARTS trip possible and for believing in her talent, ability and character to pursue her dream.

“God has blessed us and given her a talent that she hopes to use to touch others along the way,” Cathy Hawkins said. “As a family, we will always cherish the times with family and friends that have followed her at this point and have been a part of Amber’s life.”