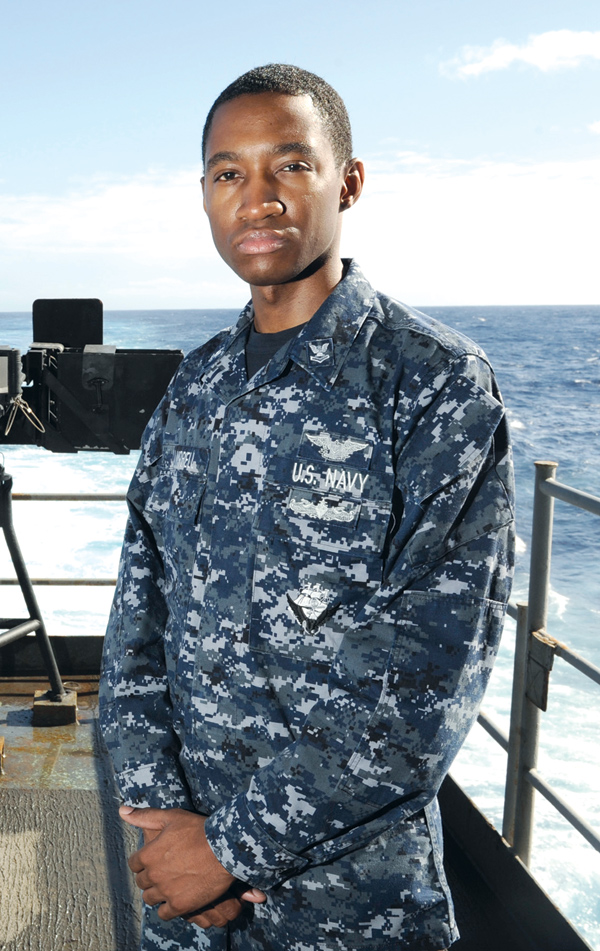 PETTY OFFICER ARRINGTON CAMPBELL aboard the USS Truman. Campbell’s job as the assistant leading petty officer in the F-18 squadron of the aircraft carrier.

U.S. Navy Yeoman 2nd Class Arrington Campbell, an Attapulgus, Ga., native, is back at his base in Virginia Beach, Va., after a brief trip home over the holidays and a seven-month deployment.

Campbell was assigned to the “Gunslingers” of Strike Fighter Squadron (VFA) 105 on board the USS Harry S. Truman, a Nimitz-class aircraft carrier.

During deployment, he received a Navy Achievement Medal, Sailor of the Month for two separate months, and was honored as the squadron’s “Junior Sailor of the Quarter.” He said he really enjoys his job as the assistant leading petty officer in the squadron, providing support for more than 210 sailors and ensuring that all their administrative needs are met.

The Truman, which weighs 90,000 tons and has a flight deck of four acres, has been underway 209 days, and returned to her homeport of Norfolk, Va., on Dec. 20 after the seven-month deployment.

Campbell has been in the Navy for 10 years, and he just completed his third deployment overseas.

During his tenure so far, among the places he’s visited are Iran, Greece, France and Dubai, which Campbell said was his favorite.

The majority of the deployment has been in the 5th Fleet Area of Responsibility, with squadron aircraft conducting flight operations in support of Operation Enduring Freedom in Afghanistan, and Operation New Dawn in Iraq.

A 1998 graduate of Bainbridge High School, Campbell was able to spend seven days with his family, who are his mother, Shirley Campbell; his father, Raleigh Campbell, and his grandparents, Virgelene Miller and Lessie Perry.

William Morrison of Bainbridge, who is assigned with the George H.W. Bush Carrier Strike Group, recently took part in a... read more