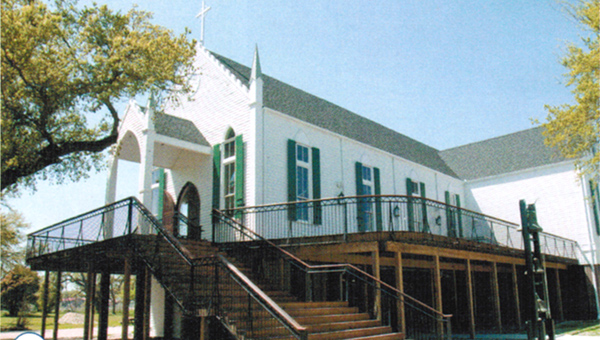 Trinity Episcopal Church in Pass Christian, Miss., celebrated Christmas this year in their newly restored church, thanks to help from the innovative SIPS Team USA of Bainbridge.

An article that appeared in the October 2010 issue of the Journal of Light Construction tells the story of how the historic church was nearly destroyed by Hurricane Katrina, then rebuilt to be more resistant to the hurricane force winds that pound the Gulf Coast.

The church originally sat on concrete piers about 4 feet above grade, and 14 feet above sea level; but that was not enough to withstand the 26-foot storm surge from Hurricane Katrina, which caused severe damage to the walls. They were all washed away, but the floor system, arch framework and roof appeared to have survived in reasonable condition.

There were doubts that the frame was structurally sound, but church members were reluctant to let the building be demolished. Further engineering studies revealed the arches were out of plumb, but it was concluded that they may have been that way since it had been rebuilt following Hurricane Camille in 1969. 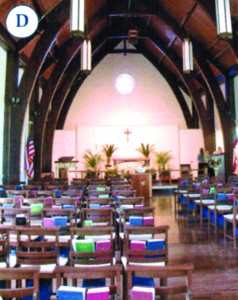 INTERIOR VIEW OF the finished church building shows the arched ceiling, so carefully retained and restored. The church was nearly destroyed by Hurricane Katrina.

The congregation decided to once again rebuild around the existing arch frame, but to make the church more hurricane-damage resistant by raising the church an additional 10 feet above the former elevation—to 14 feet above ground level. This proved to be a daunting task.

A decision was also made by architect Leah McBride to use SIPS (structural insulated panels) for the walls and roof. Given that SIPS panel design is rated to withstand 140 mph winds, and the extra insulation would result in less energy use, it qualified the church building for LEED certification.

That is where SIPS Team USA came in.

The project called for 6-1/2-inch thick R-38 wall panels and 8-1/4-inch thick R-50 roof panels that were ordered from SIPS Team USA. It took about four weeks to manufacture the panels, according to SIPS President Ron Harrigan.

Then Harrigan and Operations Manager Bob Stott spent two weeks in Pass Christian working with the structural engineers and training their construction crew how to install the panels.

Harrigan said the project was one of the more challenging projects they have done.

“We had to think outside the box,” as they wanted to retain the original timber frame and beams. They had to secure the timber frame and the beams, which presented a lot of engineering issues, Harrigan said.

“It got more complex, but it was fun,” said Harrigan.

They began meeting with the engineers and going through project planning in March of 2009, and shipped the finished product in August 2009. The church was completed in time for Easter services in 2010.

Now that the job is finished, SIPS Team USA has a good letter of recommendation from the people in Pass Christian.

SIPS Team USA is a locally owned and operated manufacturer, which began as a start-up business in 2007 with four employees. Located in the Decatur County Industrial Park, it currently employs 28 full-time people.