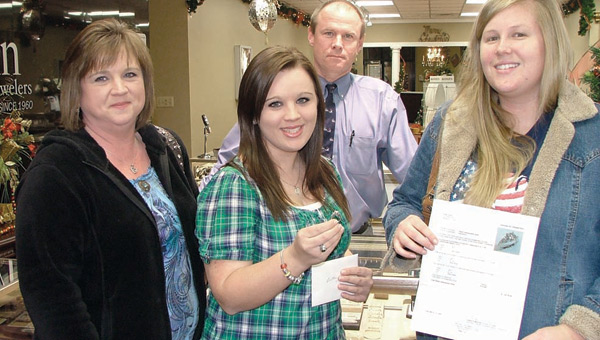 GODWIN JEWELERS WAS THE SCENE for the return of a valuable diamond ring lost at Swine Time, and making a reward to the finder on Wednesday afternoon. From the left, are Andrea and Brittany Givens, Ronnie Godwin and Kristi Boatwright.|Carolyn Iamon

What could be luckier than finding a needle in a haystack?

How about finding a valuable diamond ring on the Swine Time Grounds?

Vicky Duval, a resident of Lakeland, Fla., was the female hog-calling contest winner at Swine Time, but at the end of the day she went home a loser, having lost her engagement ring at the Climax Swine Time.

It seems as she and her family were parking their car she had taken off her ring to apply hand lotion and placed it in her lap. As she was getting out of her car, apparently the ring slipped off her lap and fell to the ground. She didn’t realize it at first, but when she did she wasn’t sure where it had occurred.

After looking for some time, she had to give up and hope someone would find it—then hope they would be honest enough to return it to her. Her daughter told her, “Mom, you’ll never get that ring back.”

That is how Ms. Duvall’s fiancé, Shane Burnett, describes the young women who found the ring and turned it over to their mother.

Brittany Givens, 17, and her sister Taylor, 14, daughters of Andrea and Robert Givens, had just exited their parked car, when Taylor spotted something shiny in the ditch along the road. She picked it up, saw it was a ring, and showed it to her sister. The two didn’t know if it was real, or what they should do with it. They took it to their mother, who was working at Stone’s in Bainbridge.

Mrs. Givens and her co-workers thought it looked real, but she decided to take it to Godwin Jewelers to make sure.

Ronnie Godwin assured her it was not only real, but a ring with considerable value and gave her some advice about how to handle the situation.

Givens kept watching the papers for an ad from someone looking for a lost ring. She was planning to run a “found” ad of her own when an article about Swine Time mentioning the lost ring appeared in The Post-Searchlight. She made contact with Ms. Duvall and asked her to identify the ring.

Since Duvall lives in Lakeland, Fla., she could not immediately come to Bainbridge to claim the ring, but made arrangements to send her daughter, Kristi Boatwright, to claim it.

Boatwright came to Bainbridge this week to spend Christmas with her grandmother. She brought with her the paperwork, a letter of confirmation and a reward check for the Givens girls.

They all met at Godwin Jewelers to make the exchange on Wednesday afternoon.

Godwin commented it was a miracle the ring was found and even better, it restored a person’s faith in human nature that the finders, knowing the value, would return the ring to the rightful owner.