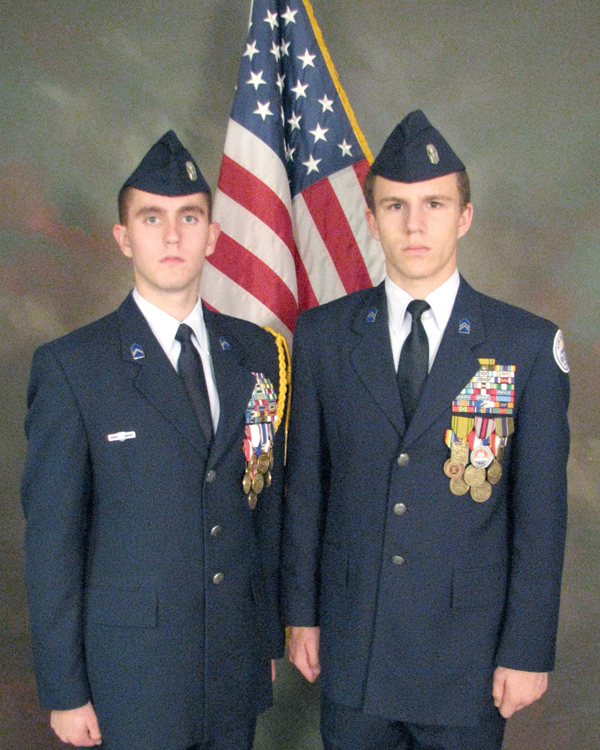 NOMINATED FOR SERVICE ACADEMIES are Stephen Dunn, on the left, and Adam Anderson. The next step in the process is the actual appointment.

Anderson, son of April and Barry Bostwick, and Stephen Dunn, son of Steve and Melanie Dunn, were evaluated by the 2nd Congressional District Nominating Committee for their academy preferences. They faired quite well against other 2nd District competition. Specifically, Anderson requested and received nomination to West Point, the Air Force Academy and the Naval Academy. Dunn requested and received nomination to West Point and the Air Force Academy.

Retired Junior ROTC Instructor Col. Gary Breedlove has been working with these two seniors for over a year.

“Stephen and Adam have spent hundreds of hours preparing themselves for the opportunity to attend one of the service academies,” Breedlove said. “I’m sure they have learned that there are numerous items to complete in order to be considered for an appointment. Their nominations were no surprise to me. Adam and Stephen both prefer to attend West Point or the United States Military Academy, but they realize that any academy would be an exceptional educational opportunity.”

Dunn is the current cadet commander of the Bainbridge High School Air Force JROTC program, and Anderson will be the second semester cadet commander. They are the 15th and 16th Bainbridge cadets to be nominated to an academy, and if successful, would become the 11th and 12th to receive an academy appointment. Additionally, nine cadets have been offered military scholarships during the same time period.

Dunn commented, “I am extremely thankful to receive nominations to the United States Air Force Academy and the United States Military Academy. It is such an honor to have the opportunity that is now within my grasp. I would like to thank God, my parents, Colonel Breedlove, and the nomination committee for helping me achieve my goals and dreams.”

Cadet Anderson added, “Receiving the nominations for the preferred military academies of my choice was an outstanding feeling. Working toward one of my life goals, to attend a military academy, finally provided me with the sense of satisfaction by earning the nomination, placing me one step closer to a dream of mine. Now two-thirds complete in the process of reserving myself a spot in an academy, I plan to continue following my dreams and working hard in school and in the community, I’d like to thank my instructors for guiding me in the right direction, my family for their support, and the Second District Committee for allowing me a once-in-a-lifetime opportunity, and mostly God for the strength and mind set with which He has blessed me.”

Col. Breedlove said to any young person in the area who might be interested in a military academy to get started early!

“The process is very competitive and includes academics, physical fitness and leadership,” Breedlove said. “Even though I am retired from the school system, I plan to continue helping prospects with the application process for the Air Force Academy and the United States Military Academy at West Point. Additionally, we have always enjoyed superb support from faculty and administrators during the application process, especially Principal Tommie Howell, who has been a terrific advocate for all our local candidates.”