4-H’ers had the opportunity to choose from more than 60 project areas for their demonstration, proving that 4-H is more than cows and cooking by offering such an array of opportunities for the youth. Some of today’s projects include sports, veterinary science, air science, computers, water conservation, photography, wildlife and performing arts, just to name a few.

Each student provided a five minute speech and used posters and other visual aids to guide them with their demonstration. The demonstrations were observed by judges and other spectators; 4-H’ers were then scored and placed accordingly. First-, second- and third-place winners were recognized at the closing assembly.

Students worked diligently to prepare for the contest months prior to the contest. Congratulations on their accomplishment!

In 1905, 4-H work originated in Georgia with the Boys’ Corn Clubs and about five years later, the Girls’ Tomato Canning Clubs were added. 4-H has come a long way and today offers much more.

Since then, the University of Georgia Cooperative Extension Service’s 4-H and youth program has helped thousands of Georgia youth “learn by doing” to “make their best better.” 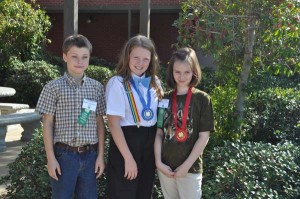 Jackson, Reece and Brenna Conley have always been taught to share with others, so when the kids won a bicycle... read more