The weather was perfect Saturday afternoon for a motorcycle ride and a large group of cyclists filled the parking lot at The Charter House Inn prepared to make the annual toy run out to the BikeFest grounds, by way of the by-pass and a parade down Shotwell Street.

The Deep South Riders have been sponsoring the toy run since 1993 or ’94, according to Roy Reynolds, who added that the first run had about six to 10 riders who met at the square and took the toys to the Winn-Dixie parking lot.

“We’ve never missed a year since, no matter what the weather,” he said.

The good weather this year definitely contributed to the large turnout, said by some to be the biggest ever.

The CC Riders, a group of 10 bikers from Crystal River, Fla., made the trip for the first time to take part in the event. They joined with two other clubs, the Southern Suns from Chiefland, Fla., and the Deguellos of Dothan, Ala., to form a brotherhood of riders that call themselves the “66 ers.”

Gloria Harrell, director of the local Salvation Army, was very excited about the turnout and the amount of toys contributed.

All toys brought in by the cyclists are donated to the local Salvation Army and distributed to needy children. 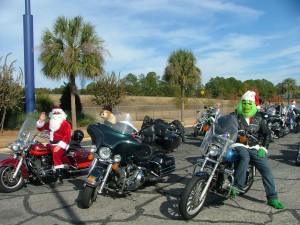 SANTA AND THE GRINCH lead the parade of cyclists as they leave The Charter House Inn parking lot and head for the BikeFest grounds with their loads of toys.