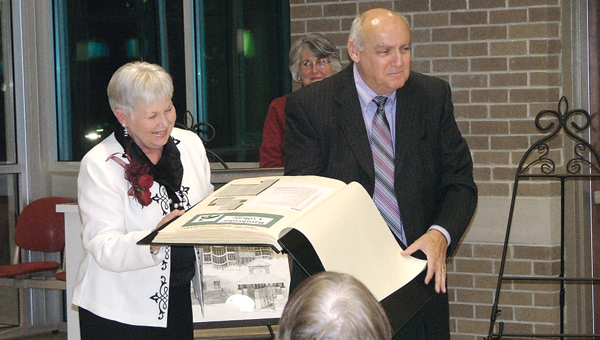 A large crowd filled the spacious area of the new Student Wellness Center on the campus of Bainbridge College Thursday evening to honor retiring President and Mrs. Thomas Wilkerson, who are leaving the area to live in North Georgia.

In addition, the reception also honored a list of six BC college associates who are retiring this year, and recognized 25 former teaching and staff members with emeritus awards, described by Wilkerson as “catch-up” awards.

An agenda of prestigious speakers generously praised, applauded and thanked Dr. Wilkerson for his service and achievements during his five years as BC president. Frequent references were made to his ability to heal the wounds of the college, the community, and those that were interrelated, and for the growth that has been accomplished under his leadership.

This growth includes the reconstruction of the Kirbo Center, the building of the new Wellness Center, the development of the Blakely campus, the conversion of the old bowling alley and doctors offices near the mall for use of the cosmetology program under technical studies, and the development and growth of the scholarship program.

Dewey Robinson, a member of the BC Foundation Executive Committee, said three scholarships have been created in the name of the Wilkersons. He announced one of those was a contribution of $10,000 from Bill Weldon, President of All State Construction Co., the company that did the work on the Kirbo Center and built the Wellness Center.

Wilkerson responded to the remarks saying, “A lot has been said about me tonight, and some of it is true.” He then went on to say that nothing that has been accomplished over the past 5 years has been done by one person, but by the larger community, which he defined as much more than Bainbridge and Decatur Countians, but surrounding counties as well.

He reiterated his thoughts on the purpose of the college, saying he would hope that the college continue to live up to the mission and never lose sight of the fact that it is here to serve others—to teach the students who come there. He described teaching as a noble profession, saying the education of one member lifts the whole family up. “The minute we lose sight of that, it is time to go home,”

Both Tom and Angela Wilkerson were obviously touched by the accolades and gifts. Dr. Wilkerson expressed that he was “most overwhelmed” by the gift of scholarships, saying that long after he was gone, the scholarship gifts would live on.

Leonard Dean, director of plant operations for the college amused the audience as he described the last five years with Dr. Wilkerson as very busy and a lot of fun, then added he didn’t know what the Wilkersons were going to do, but for his part he was going to rest.

The Wilkersons were presented with several gifts, including a framed pen and ink drawing collage by Mary Cox of the buildings at BC, an album of discs recording the memorable events on both campuses and a large leather scrap book full of articles and photos.

In presenting the scrap book, Barbara Snipes, who has served as secretary to all presidents of Bainbridge College, told the audience that the first page of the book contained the greeting she received from Wilkerson every morning when he entered the office, “Tell me something good,” and the last page of the book was his usual farewell, “Say good-bye, please.”

Clarification: The cutline accompanying the photo of Dr. Wilkerson in the Wednesday, Dec. 8 front page article contained an error. It should have read,”Wilkerson and his wife, Angela, plan to move to Young Harris, Ga., to get away from the bugs, humidity and be near grandchildren and mountains.”