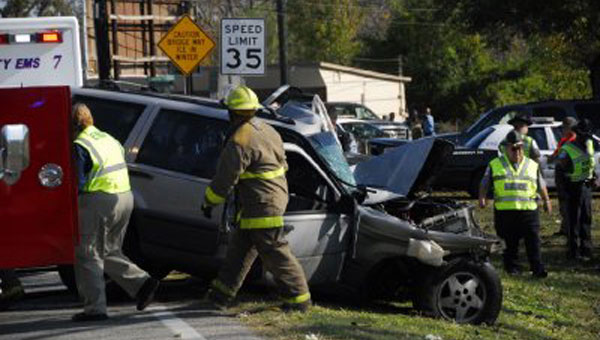 An Attapulgus man was killed in a traffic accident on Spring Creek Road Monday morning.

The accident happened shortly before 10:30 a.m. at the intersection of Butler Ferry Road and Spring Creek Road, just south of the U.S. 27/84 bypass.

The crash victim was identified as Willie B. Smart, 61, of 107 Wilson St., Attapulgus.

Smart, who was driving a Jeep Grand Cherokee east on Butler Ferry Road, failed to stop for a stop sign, according to Major Walter Landrum of Bainbridge Public Safety.

Ashby Randolph Floyd, 32, of 226 Barwick Road, Bainbridge, was traveling south on Spring Creek Road in a Mack truck towing an empty flatbed trailer. Floyd braked hard and swerved in an attempt to avoid a head-on collision, said Cpl. Nigel Hurst of BPS. The semi struck the left front bumper of the Grand Cherokee, pushing it a short distance down the road. As Floyd maneuvered the semi off the side of the road, it clipped the back end of a tan pickup truck, which was headed north on Spring Creek Road, Hurst said.

The collision crushed the driver’s side front end of the Grand Cherokee, forcing its engine block back into the driver’s compartment. Smart passed away a short time later. Firefighters had to use the Jaws of Life to extricate the body for transferring to an ambulance. BPS officers said there was no indication that Smart was wearing a seat belt.

Neither Floyd, the semi truck driver, or the driver of the tan pickup was injured.