Bridges: Farming has left its mark 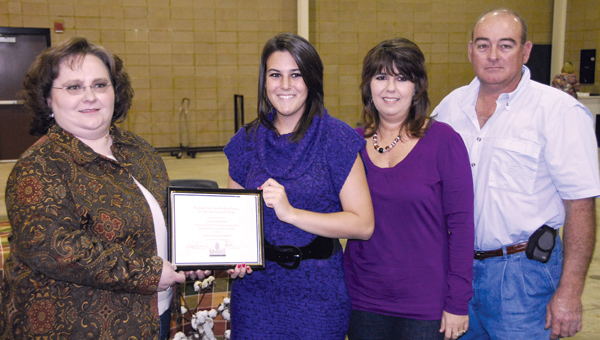 BAINBRIDGE HIGH SCHOOL senior Malori Maxwell received a scholarship award for her essay on the status of modern agriculture. From the left are Celeste Burke, a member of the Chamber’s Ag Committee, Maxwell, mother Dina Maxwell and father Paul Maxwell. |Brennan Leathers

A large crowd filled the Cloud Agricultural Livestock Pavilion Friday to show their appreciation for farming, which is often called the driving force of the Southwest Georgia economy.

“America counts on farmers … we realize the major impact that agriculture has on our businesses and our lives,” said Ashley Gardner, a member of the Chamber of Commerce’s 2010 Agriculture Committee, which organized the event. “As we prepare to celebrate the [anniversary of the] first Thanksgiving, we should remember that it was a celebration of a bountiful harvest.”

The progress of Decatur County has largely paralleled the history of farming, according to the luncheon’s speaker, highly respected local farmer John H. Bridges Sr. of Brinson.

The evolution of farming has been based on advancements in technology and developments of new methods for planting, cultivating and harvesting crops, Bridges said.

Many years ago, Decatur County was even more densely wooded than today and the agricultural business revolved around timber and sawmill products. Those wood-based products led to development of the labor-intensive turpentine distilling, a practice Bridges’ late father and other men across South Georgia devoted their lives to. Livestock were grown for food and as farmers increasingly produced feed products like wheat and corn, the woods gave way to cleared land.

Then came grist mills and King Cotton, at least until the boll weevil devastated crops and turned many farmers to peanuts, Bridges recalled. While the realization of peanuts as a cash crop was a godsend, the early methods of growing and harvesting peanuts were extremely arduous. Early on, peanuts were planted, harvested, dried and transported largely with the help of people using their hands and feet.

While today’s farmers still have to work hard to plan and maintain their crops, technology and machines have made farming much more efficient, a topic that Bainbridge High School senior Malori Maxwell focused on in an essay she read during Friday’s luncheon. For her essay focusing on the status of modern agriculture, Maxwell received a scholarship from the Chamber of Commerce at the luncheon. 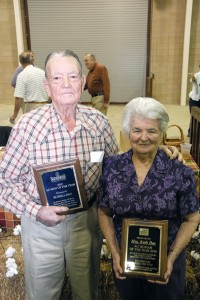 The 2010 Ag Man and Woman of the Year are Russell and Ruth Day, who were recognized for their lifelong contributions to local agriculture at Friday’s ag appreciation luncheon.|Brennan Leathers

Days are Ag Man and Woman of the Year

Bridges, the 2001 Ag Man of the Year, was honored with the Chamber making a donation on his behalf to the 4-H Club and the Future Farmers of America Alumni Association.

Two of Bridges’ farming contemporaries and friends, Russell and Ruth Day, were recognized as the 2010 Ag Man of the Year. The couple both grew up in farming families and continued that legacy after they married in 1950. From his sharecropper roots, Mr. Day began his own farming operation, amassing 1,000 acres of row crops and more than 700 cattle by the time he retired in 1997.

Mrs. Day was a true farmer’s wife, putting up produce and cooking the family meals, said Lindsey Hayes, coordinator of the local 4-H program. Mrs. Day drove the tractor and worked in the garden, as well as instilling appreciation for farming in the couple’s three children. Son, Roger Day, continues the family legacy today.

Climax citizens woke up to a terrible shock on Thursday morning as they learned of the sudden death of City... read more