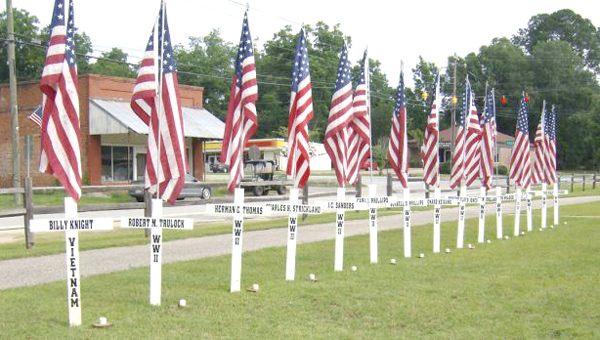 CROSSES FOR FALLEN SOLDIERS of World War I, World War II and Vietnam wars. Swine Time 2010 will honor these men who gave all in service to our country.|Jean Ouzts

2010 will mark the year that Swine Time gave special tribute to the Climax fallen soldiers of World War I, World War II and Vietnam.

A special float holding crosses, each topped with the American flag, and representing all 15 men will begin the parade. This tribute will honor those who gave all. There will not be a grand marshal this year as Climax takes this time to honor those from this community who sacrificed their life for our freedom.

With the war going on today, the members of the Climax Community Club felt it only fitting that those who have gone before receive this honor. Not to take away from our younger generation who are even now placing themselves in harm’s way so we can continue to be free, but we feel they too would say, “Yes, honor our fathers and grandfathers, for they taught us with dignity, integrity, while serving with honor and pride our country, and the red white and blue.”

As the float passes by on the parade route we ask that you take a moment to reflect on these, our proud soldiers. As they were honored to fight and give their life, so we stand solemnly and proudly and salute these brave men.

Also on the Swine Time Grounds. the bookmobile will be showing videos all day of World War II veterans who remember the hardships of war.

During Swine Time, take a moment to go by the information booth on the grounds, and pick up a Swine Time book. It has information on these brave soldiers. We feel you will find this informative and touching, at the same time we ask that you patronize the businesses that also make up this book. You might also find some pictures that are interesting. The Swine Time Book is free.

Climax sends deepest sympathy to the family of Joan Dean during their time of grief. She will be missed.