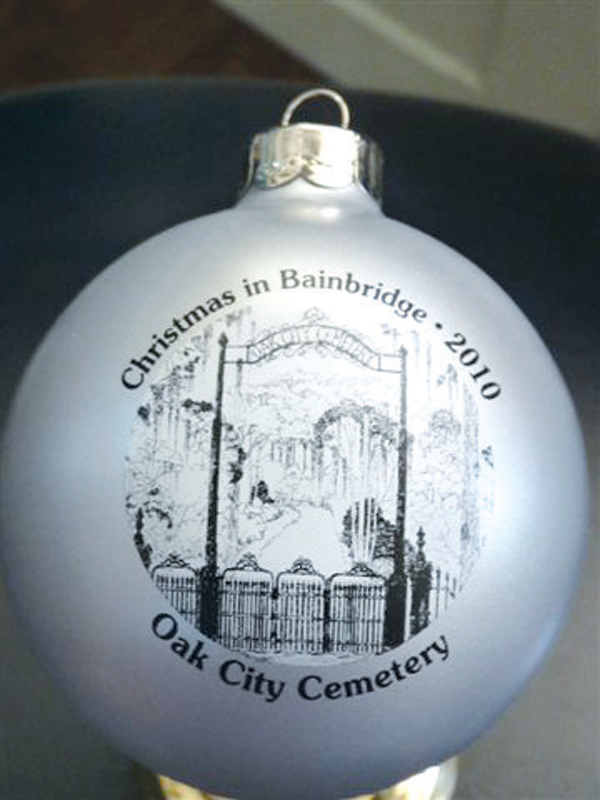 OAK CITY CEMETERY is the Bainbridge Christmas ornament for 2010.

Since 1991, the City of Bainbridge has had a tradition of selling commemorative ornaments of pen and ink drawings done by Mary Barber Cox.

Cox is an accomplished artist who has volunteered her incredible talent every year to make each ornament a treasure.

This year, she has done it again with the 2010 ornament depicting the entrance of Oak City Cemetery. All of the ornaments are Barber’s depictions of historic sites in Decatur County.

Prior to the establishment of Bainbridge, the Oak City Cemetery site had long been home to an Indian village. It was established as a cemetery in 1853, when William H. Peabody was buried there. His grave is located next to the powder house, where gun powder was stored during the Civil War.

In 1878, the west section of the cemetery was deeded to Temple Beth-El and became one of the first Jewish cemeteries in south Georgia.

Miriam Hopkins, a famous Broadway, movie and television star from 1920s to 1950s is buried there. Hopkins was nominated for an Oscar and has a Star on the Hollywood Walk of Fame.

Marvin S. Griffin, the 72nd governor of Georgia, is also buried in the cemetery, along with numerous unknown Confederate soldiers and local legends.

Ornaments are now on sale at City Hall in the Community Development Office, 107 S. Broad St. Individual ornaments are $8, or you can buy an entire set for $160.

They will also be on sale at Holiday Open House on Sunday, Nov. 21, from 1 to 5 p.m. and Mrs. Cox will be in Willis Park for individual signing of ornaments during the event.