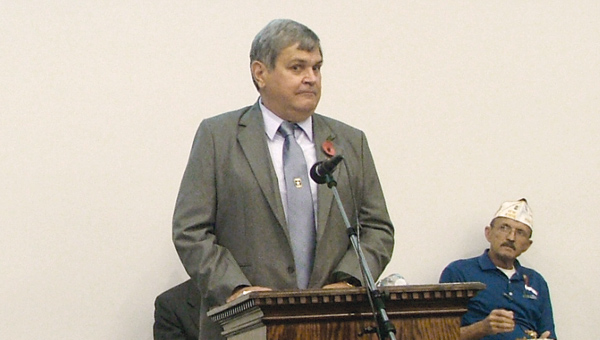 Thursday morning in Willis Park, Hunt, who flew 367 combat missions in Vietnam, related how his grandmother’s positive influence led him to become a Marine Corps officer and Navy pilot in Vietnam.

“My grandmother, who was a very patriotic person, would write to U.S. Senator John Stennett of Mississippi frequently about different things,” Hunt said.

“One day when I was at her house she had newspapers spread over the kitchen table with stories about Vietnam and the Vietnam War. It was the first time I ever heard of Vietnam, and I wondered where it was. Little did I know that six years later I would be there serving in uniform.”

Hunt said it was a different era.

“Today we have an all-volunteer armed forces. In my day there was a draft. I had just graduated from college and had a good job as a chemical engineer in Charleston, S.C.,” Hunt said.

“I was a little angry about going into the service, so I wrote my grandmother and asked her why I had to. She answered me in eight simple words. Those words were ‘Read the Declaration of Independence and read the Constitution.’”

“As I read the two documents, the three words ‘We the People’ stuck in my mind. I knew it was my duty as an American to go and do my part to provide for the common defense and help keep our country free. I always had an interest in flying as it was a Marine recruiter who gave me that opportunity.”

Master of ceremonies Bob Strickland, commander of American Legion Post 62, led the audience in the Pledge of Allegiance to the flag.

During the Kirbo Center luncheon, retired Lt. Col. Bush’s address was titled “The Railroad Car” and it chronicled a spot where two famous armistices were signed.

“Before World War 11, we celebrated Armistice Day on November 11, the day the Germans surrendered, ending World War 1, then known as the great war or the war to end all wars.,” Bush said in opening his remarks. “And what a war it was, brutal and deadly beyond imagination, with the Maxim machine gun to blame for many of the casualties.”

Many believe that Mr. Maxim was a German. Actually, he was an American who tried to sell his weapon to the U.S. Army whose leaders showed little interest, nor did the British, Bush said. So prior to the great war, he licensed the design to the Germans who produced them in the thousands.

“After watching their soldiers slaughtered by the Maxim, the British also bought the license. My favorite book about the war is Martin Gilbert’s ‘The First World War.’ It documents the slaughter all too well,” Bush said.

As an example, during 10 years of the Vietnam War, America lost 58,000, killed either in combat or by disease and accidents. The British had that many killed in one battle. During World War I, the British suffered more than 3 million casualties, including more than 900,000 killed.

“France fared even worse with over 6 million casualties with 1.3 million killed. This is twice as many fatalities than the United States experienced in all of its wars and conflicts. If you were a French soldier, you had a 75 percent chance of being killed or wounded. Basically both Britain and France lost an entire generation of men,” Bush said.

“Although the United States entered the war late, we still paid a dear price with more than 53,000 killed in action and another 63,000 who died of disease and accidents,” Bush said.

“However, our presence proved to be the final nail in the German coffin. They sent out peace feelers and at 5 a.m. Nov. 11, 1918, an armistice was signed in a railroad car parked in a French forest. At 6:01 a.m. a message was sent from Paris headquarters to commanders. It read that hostilities would be stopped on the entire front beginning at 11 o’clock on Nov. 11 and that the allied troops would not go beyond the line reached at that hour on that date until further orders,” Bush said.

“All over the world there were celebrations except for one place, the front lines. The soldiers believed the war would continue at any moment. They lit log fires that night, the first at the front lines since the war began.”

The men warming their hands expected German artillery to rain upon them without warning or German planes to begin strafing.

The armistice held and the French turned the railroad car into a monument, placing a plaque on a great granite block with the following inscription: “Here on the 11th of November, 1918 succumbed the pride of the German empire vanquished by the free peoples which it tried to enslave.”

Bush explained that it would not be the last surrender to take place in the railroad car turned monument.

On May 10, 1940, Hitler unleased his blitzkrieg into the low countries. Three weeks later, the British army was scrambling aboard ships and boats at Dunkirk.

“It took only another three weeks for the French government to disintegrate. World War 1 hero Marshall Petain formed a new government and asked the Germans for an armistice.

Hitler ordered that the signing ceremony take place in the same railroad car that saw the humiliation of the Germans just 22 years earlier. William Shirer, author of “The Rise and Fall of the Third Reich,” was a witness.

After the signing Hitler and Goering walked to the granite rock and read the inscription, Shirer reported that Hitler’s face was afire with scorn, anger, hate, revenge, triumph. Later, the Germans had the railroad car destroyed, Bush said.

With the ribbon cut to open the Bainbridge College (BC) Student Wellness Center Oct. 26, the BC Foundation Inc. held... read more