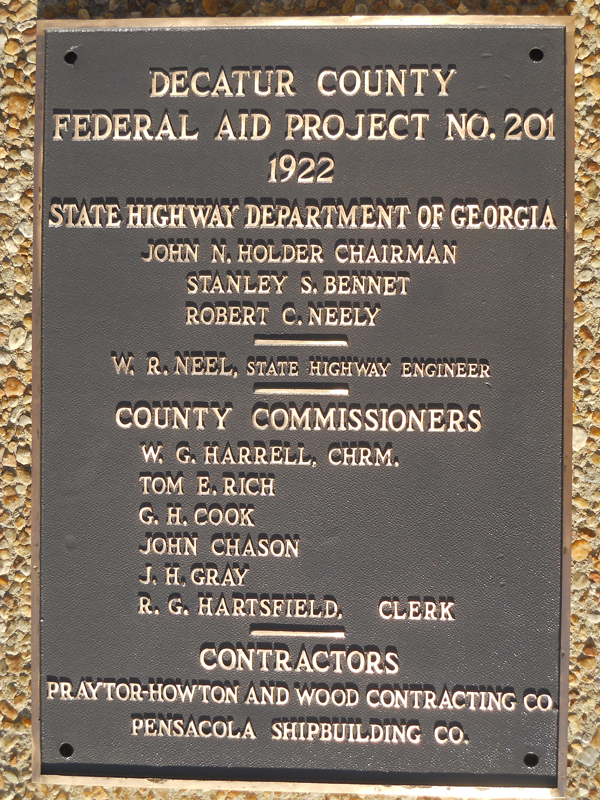 RESTORED TO ITS ORIGINAL BRILLIANCE, a plaque from 1922 that was on the old Calhoun Street bridge returns to Bainbridge.

In 1922, W.G. Harrell was chairman of the Decatur County Commission, which gave him the honor of having his name on a bronze plaque that decorated and commemorated the Memorial Bridge spanning the Flint River connecting Bainbridge and West Bainbridge.

After 52 years in service, in 1974, the bridge was torn down, and a new Calhoun Street bridge, the current one on which we traverse the river today, was constructed alongside.

When Memorial Bridge met its fate in 1974, the customary plaque was rescued by Steve Howard, a 1960 graduate of Bainbridge High School, and vice president of the company in charge of demolition.

At the time, Howard rescued the plaque, and since 1974, as he moved from home to home several times since that date, the plaque moved with him, stored in one of many garages.

Not knowing any longer what to do with it, and not wanting to keep it any longer, Howard came to Bainbridge last Monday night and unveiled it before the Decatur County Historical and Genealogical Society.

The society will place it in its archives, and when the time comes, put in on display in the forthcoming museum.

In the meantime, anyone wishing to view the plaque, it is on display at The Book Nook, located at 823 S. Scott St.

In making the presentation Monday night, Howard said there were three contracts in 1974 in building the new bridge, one to demolish the old bridge that he supervised, one to build the new bridge, and a third to prepare the roadways entering the bridge.

Howard brought along some clippings from the 1974 editions of The Post-Searchlight, showing photos of the new Calhoun Street bridge under construction by Oxford Construction Company of Albany. Apparently, there were some heavy rains at the time, as one photo shows the water level at 28 1/2 feet, hampering installation of some of the steel beams.

Except for their immediate families, the names on the 1922 plaque may long be forgotten, but we can remember them now as this piece of history returns to its rightful home.

Our deepest thanks to Steve Howard for preserving this piece of history, and bringing it home to Bainbridge.

The next time the illegal immigration advocates start whining about the poor Mexican workers coming into the United States to... read more