Christmas Parade lights up the night

The weather was warm enough for mosquitoes, but the Bainbridge Christmas Parade happened Monday night after being postponed due to bad weather on its original date of last Thursday, Dec. 12.

The Bainbridge High School Bearcats Marching Band was a crowd-pleaser providing Yuletide favorites for citizens young and old who lined the streets to watch the parade as it traveled down Shotwell Street and through downtown Bainbridge, ending at the River Plaza Shopping Center on West Street.

Bainbridge-Decatur County Humane Society supporters walked dogs dressed in holiday garb, including one Animal Shelter dog dressed in Santa’s hat and robe. Some Boy Scouts were camping out for Christmas, while others promoted boating safety with the slogan “Do Your Best, Wear Your Vest.” Friends of Action Marine and Powersports stayed high and dry riding in boats, while Regions Bank employees were staying fit by riding bright green bicycles.

Some young dancers from Lucretia’s School of Dance performed and sang carols for the crowd, followed later by girls from Murkerson’s School of Dance and Cheer Academy tumbling down the street and dancing skillfully atop floats. The Swine Time Princesses were lovely as ever on a float lined with poinsettias, a traditional Christmas plant.

Among the floats reminding people of the Christ in Christmas were manger scenes presented by Maranatha Baptist Church and Calvary Assembly of God. Grace Christian Church presented a Christmas village and choir.

Of course, what Christmas parade would be complete without Santa Claus himself, who rode on a fire truck escorted by Bainbridge Public Safety officers at the parade’s finish.

“I imagine he will have to leave here right away and get back to the North Pole,” Bench said. 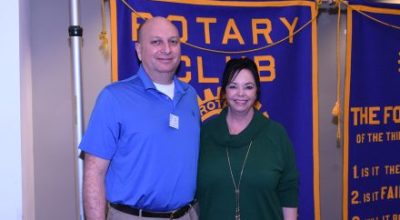