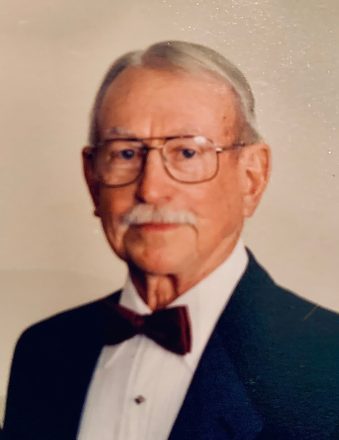 Thomas Steele Malone, Jr. died on January 22, 2023 at the age of 98. He was born to Thomas Steele Malone, Sr. and Kittie Burford Malone on July 5, 1924, in Camden, Alabama. Raised in a loving Christian family, while in his youth, he enjoyed all the benefits provided by growing up in a rural environment where he spent his spare time playing sports, hunting, fishing, and collecting artifacts. The collecting interest followed Steele throughout his life.

As an active high school student, Steele served as captain of the football team and president of his senior class. Immediately upon his high school graduation, he entered Alabama Polytechnic Institute, now Auburn University, where he stayed only a short time before volunteering for military service on December 7, 1942.

During WWII, he served in the European Theater in the 125th Combat Engineers Battalion and was discharged as a Staff Sargent. Thereafter, he re-entered API where he earned a degree in Chemical Engineering. At the same time, he obtained a ROTC Commission in the artillery and was declared a Distinguished Military Graduate. Following graduation, he was employed by Porocel Corporation in Little Rock, Arkansas.

In 1950 he married Peggy Ponder, his college sweetheart, from Fairfield, Alabama. Shortly thereafter Steele was recalled into military service during the Korean War, spending most of the time as an instructor in the Department of Material at the artillery school at Ft. Sill, Oklahoma. He was discharged from the Army as a 1st Lieutenant and returned to work with the Attapulgus Clay Company in Attapulgus, Georgia. He and Peggy moved to Bainbridge where their three children were born.

In 1966 his wife Peggy passed away after a brief illness, and for four years with the help of God, family, and good friends, Steele was both mother and father to his three children. In 1970 Steele married Kathleen Thomasson Mayfield. They remained married until Kathleen’s death in 2019. Steele was blessed with seven grandchildren and numerous great-grandchildren. Steele worked for the same company, now BASF, for forty-three years, retiring as the General Manager of the Attapulgus Operations of the Engelhard Corporation. He held this position for the last seventeen years of his employment.

During his employment and after retirement, Steele was involved in his community in many capacities. He served as a Director of Georgia Mining Association, a Director of First National Bank of Bainbridge, now Bank of the Ozarks, a member of the Decatur County Chamber of Commerce, a trustee of Bainbridge College, a member of Bainbridge College Ambassadors, and a Board Member of Memorial Hospital and Manor. He held several positions within the First United Methodist Church of Bainbridge, including Administrative Board member and chairman/member of the Pastor Parish Committee. He also served as Chairman of the Board of Directors and President of the Bainbridge Country Club.

Steele has said the three most important things in his life were his family, of which he was extremely proud, his Christian religion, and his country. He was accomplished in woodworking, designing and creating leaded glass, bonsai artistry, and collecting most anything of historical value. He was always interested in firearms and was a recognized expert of Colt handguns.

As an individual who loved the out-of-doors, Steele enjoyed playing tennis, golf, hunting, particularly quail hunting, and fishing. As a golf enthusiast until well into his nineties, he frequently shot under his age the last four years he kept score. In later years he became a NASCAR fan and spent many Sunday afternoons watching the races with his son-in-law.

The funeral service will be held on Friday, January 27, 2023 beginning at 2:00 p.m. at First United Methodist Church with Reverend Melissa Traver and Reverend Stephen Webb officiating. A time of visitation will follow the service. A private burial will be held at Oak City Cemetery.

The family would like to thank Steele’s caregivers, his doctors, the staff at Bainbridge Healthcare, AGAPE Hospice, and the staff at Memorial Hospital for the kind, compassionate attention he has received. In lieu of flowers, memorial donations may be made to the First United Methodist Church Building Fund, P.O. Box 541, Bainbridge, GA 39818.

All are invited to sign the online guest registry at www.iveyfuneral.com.