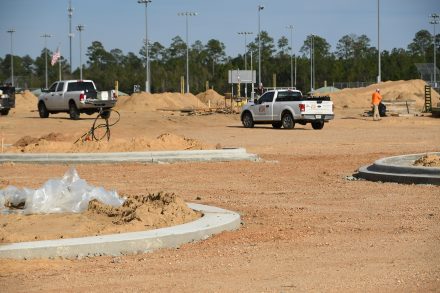 Members of the Bainbridge Decatur County Recreation Authority met on Thursday evening for their first meeting of the New Year. Among just a few of the items on the agenda was the Rec Authority’s 2021-2022 internal audit report; surplusing one of the Authority vehicles; a new open records request policy; as well as updates on the Authority’s ongoing pickle ball project, and the construction of the indoor recreation facility.

According to Rec Authority executive director Joel Holmes, the indoor sports facility is steadily progressing. “We’ve cleared the property, they poured the footings, and they’re currently pouring the floor,” he told the Post-Searchlight on Friday. “Then on February 9, we’re expecting the metal shell of the building, which is the main structure of the building… so it’ll really by middle-February, start looking like the building that it’s gonna be.”

As for the Authority’s pickle ball court project, Holmes said, “We budgeted money in the previous year’s budget, and carried it over to this year’s budget.” This money amounted to $200,000. The Recreation Authority finished two pickle ball courts on Potter Street last year, and is now looking to expand to the Bill Reynolds Tennis Center, which currently has two courts. “We’re gonna take maybe about 20% of our parking lot and re-grate it, and put in 16 new pickle ball courts there,” he said. “We’re hoping to start that project in March and finish by the end of June.”

The Authority’s 2021-2022 audit was conducted by Burke, Worsham & Harrell, with Bill Burke addressing the Authority Thursday evening. “The only finding that was considered a significant finding, was the fact that y’all were over-budget at the end of the year,” Burke said, “and the reason for that… you had that capital outlay on the building and all, that was not budgeted. That’s the main thing that caused you to be over-budget, and y’all were over-budget $613,000.” Burke elaborated on how the Authority should address this, saying, “What accounting principles want you as a board to do, is to watch your expenditures, and if you see before the end of the year, that you’re gonna be over-budget, just amend the budget.” He described this as a “timing issue”. Burke also advised the Authority to keep an eye on any potential unfunded pension benefits; while the Authority is currently fine, he stated that is something that regularly gets government bodies into legal trouble.

After Burke’s presentation, Holmes discussed surplusing one of the Authority’s vehicles, a 2007 Dodge with multiple issues, including oil leakage/burning, air conditioner issues and worn seats, with the Authority approving the surplus. The Rec Authority has already acquired a replacement car.

Holmes also brought up a way to “streamline” the current open records request system employed by the Authority. He stated that, in his time here, he had not found any official policy for the Authority on open records requests, and had received several directly from citizens. “I would just like to streamline it similar to the way we did it at my previous job in Albany,” he said. “In Albany, an open records request came to any city department, it went to the city attorney first. If it was a recreation request, the city attorney would contact me, not the citizen directly, and would ask me exactly for what information was requested.”

The next Recreation Authority meeting is scheduled for Thursday, February 16 at 6:15 PM.