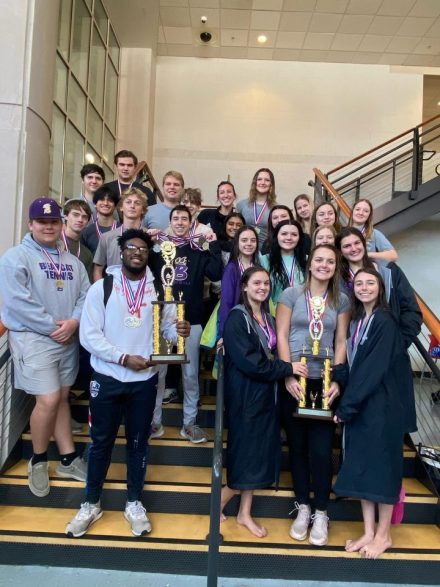 The success throughout the whole season and specifically through the Region Championship was due in large part to the amount of training and practices the swimmers put in, even during breaks and early mornings.

“I think we won because of the amount of practice we put in during the last couple of weeks,” said senior Ramsey Mathews. “Both of our coaches have been helping with certain events all week long and really focusing on specific events we were going to swim that day.”

For senior Josh Fillingame, being able to win a Region Championship during his last season was extremely special because it was the first time the boys team had won since he began swimming as a freshman. Fillingame has had to not only balance his schoolwork, but is also in the midst of wrestling season and has been able to stay focused and consistent in the water.

“Since my freshman year the boys have never won a region at all,” said Fillingame. “So for me it was really special and I just kinda thought to myself like ‘man, about time.’”

“We didn’t win region my freshman year but we have won it the past three years but I feel like this season it means more because it is my last one and it’s exciting to think about going out on top,” said Mathews.

For the 2022-23 seniors Ramsey Mathews, Jaycee Maxwell, Reese Godby, and Josh Fillingame, seeing the swim program grow and have success during their time at Bainbridge High School has been something special to see and they know it will keep growing each year.

“We always have had a decent amount of girls on the team but I think we’ve really seen it grow with the number of boys the past few years,” said Jaycee Maxwell. “Usually it’s only like three or four but this year there were nine boys on the team so it was cool to see it grow.”

Being able to stay focused, block out distractions and create a balance between school, sports and personal life has been something that this year’s Bearcat swimmers have excelled at and it starts with the dedication of their coaching staff of Eric Conner and Beth Dollar.

“Our coaches honestly really help us find that balance,” said Mathews. “I had a final last semester that was the morning after a big swim meet and it didn’t end till 8:00 and the coaches let me leave early so I could study and get some rest.”

“We know that they are student-athletes but the student part comes first,” said assistant coach Beth Dollar. “We’re very vigilant of knowing that their schoolwork comes first before their swimming.”

“Honestly seeing how much our swimmers have grown over the years has been almost weird,” head coach Eric Conner said with a laugh. “I say that because when they come to us as freshmen they’re basically babies. From an overall leadership standpoint they have all done a great job and stepped up and helped the younger swimmers get better at their events. They’ve made a buddy system to help mentor each younger swimmer through different events. We just do our best to create a whole family atmosphere.”

“Our friendships and relationships have grown so much and we’ve become really close,” said senior Reese Godby. “Yesterday they were saying how much they’re going to miss us and how we’re not allowed to leave. We just try to be there for all the younger swimmers cheering them on and guiding them through swimming and through life.”

Although the swim season has come to an end, the seniors will begin the next chapters of their lives after Bainbridge High School. Josh Fillingame plans to attend Troy University and earn an engineering degree, Reese Godby plans on staying in Bainbridge for a year to get core credits done and also keep up with the swim team, Jayce Maxwell plans to attend ABAC where she wants to specialize in pediatrics and Ramsey Mathews plans to go to Georgia Southern and major in psychology. 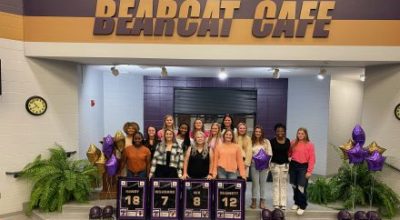