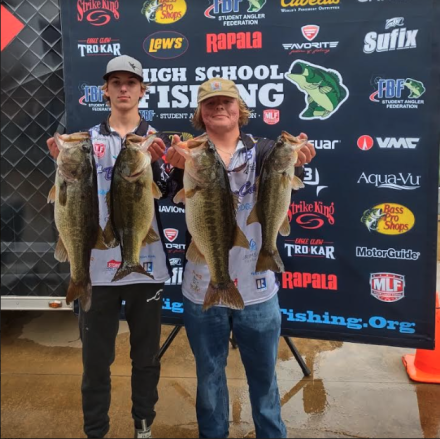 The Bainbridge Bass Cats took to Lake Seminole this past weekend as they competed in the GHSA Regional Qualifying tournament. Over 250 competitors flocked to Lake Seminole on Saturday but the Bass Cats proved they were among the top tier talent in the competition.

The dynamic duo of Hayden Reynolds and Caleb Logue continue to dominate and maintain their spot among the state’s best as they came in first place over the weekend, winning the tournament with a weight of 21 pounds and six ounces.

The Bearcats weren’t done as the team of Gage Sellars and Brock Lewis saw a seventh place finish, weighing in at 13 pounds and one ounce and the team of Brennan Enfinger and Corbyn Thompson seeing a twelfth overall finish with a weight of 11 pounds and six ounces.

Earlier in the season, Coach Roy Matthews was impressed with the leadership, grit and dedication that his anglers have shown both last season and at the middle school level, and their mentality continued into the GHSA Regional Qualifying Tournament.

“These guys put in the time on the water and compete on the various trails throughout our area,” said Matthews.  “They are dedicated to their sport and put in lots of time and effort like a professional. Another thing these teams do well is grind through tough days on the water. They all show the grit to keep making cast and in the end the results are what they bring to the scales.”

The Bass Cats will now focus on the second round of the GHSA Region Qualifiers as they will travel to Lake Oconee on February 18 as they hope to see even more teams qualify for the official GHS State Tournament in Clarks Hill on May 20.