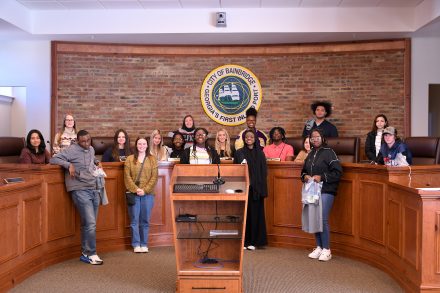 This past week saw multiple city government officials being shadowed by BHS students, as part of this week’s Student Government Days. Crystal Hines, Community Affairs Director for the City of Bainbridge, spoke to the Post-Searchlight about the event.

“This is, that I know of, year seven,” she said, in regards to how long the program has been ongoing, “but we did take two COVID years, so five essentially.” She continued, “It was a program that had been in place a couple of years prior to that, then they took a sabbatical, and then brought it back.”

According to Hines, the program is always held in the fall semester each year. This year there were 23 students participating for both days. Beginning on Wednesday, students toured city hall, the water pollution control plant, as well as both the public works department and public safety department, with the day concluding with a presentation by the city manager.

“Today we returned, we toured the Public Safety training facility, got to go through some of those courses, and then we broke into small groups and they went off with the employees they were shadowing,” Hines said Thursday. Students were allowed to pick which employee they wished to shadow based off their job title. To conclude the exercise on Thursday, students held a mock city council meeting, with some students taking on the role of mayor and council members, while others presented alongside the city officials they had shadowed.

“I think this year was great,” Hines said. “The students had fun, they certainly were exposed to things they would never have any idea about, the water pollution control plant being one… We get it, they see it as a free two days out of school, it is really hugely helpful.” She continued, “A lot of them had no idea what goes on behind the scenes, they don’t know the job opportunities that are available in local government, and so being able to see those hands-on may actually open their eyes to something they could see themselves doing.”

Hines concluded by thanking Bainbridge High School for their role in creating the program.