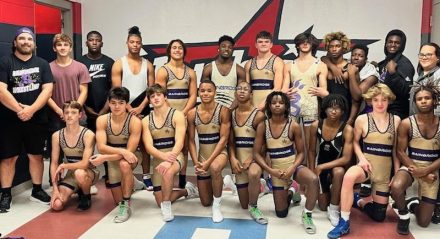 The Bainbridge High School wrestling team is off to a 2-0 region start as they competed in the “Rumble at the Rock” meet before Thanksgiving. In their meet, the Bearcat wrestlers earned region wins against Shaw and Cairo and earned a third win against Brantley County.

The three wins were good enough for a second place overall finish in their bracket as the Bearcats look to build from momentum with the first two competitions under their belt. One specific thing that head coach Paul Coleman was impressed with was their ability to “pin” their opponents.

“I was really impressed how we were able to get our opponents to their back and finish the match with a pin, which is placing both shoulder blades of the opponent on the mat,” said Coleman. “Pins are critical to team points; Each pin is worth six points for the team. We had a whopping total of 25 pins. I would love to see the team continue to increase this number as we continue into the season.”

Coleman was also pleased to see his wrestlers leadership and competitive spirits as his wrestlers were constantly cheering their teammates on, helping them in between matches and giving pointers to help each other.

After two really competitive matches between teams within the region, Coleman and his team are excited for the opportunity to build off of this momentum and really take control of the standings as the season progresses.

“It gives the team great confidence that we were able to have impressive wins versus Shaw and Cairo,” said Coleman. “Shaw was a very back and forth match, until some of the wrestlers stepped up and we got on a winning streak with some well timed pins. Cairo has one or two wrestlers that will make some noise in the region and state, though overall I was very impressed how we handled the Syrupmakers.”

Although the Bearcats went 2-0 against region opponents, Coleman and his squad have their eyes on a Hardaway group who has looked impressive to start the 2022 season.

“One region opponent that was there, but we did not face was Hardaway,” said Coleman. “I kept my eye on Hardaway’s matches, and I will say that the Hardaway team impressed me in the way they wrestled in their respective bracket.”

During the “Rumble at the Rock” competition, Bearcat wrestlers Joshua Fillingame, Zachary Budrick and Layton Burris all had impressive showings and are looking to do big things for the team in 2022.

“Josh Fillingame continues to shine as he is now 8-0 on the season, along with his Junior teammate Zachary Budrick who has an impressive 7-0 record as well,” said Coleman. “Malcolm Spann has shown that he can be great with a flashy 5-2 record, along with Layton Burris with a 6-1 record, with that one loss being a close battle with a one point difference that ended in the opponent’s favor at the first tournament.”

This upcoming weekend the Bearcats will be faced with tough competition and an interesting format as they will compete in the Cam Brown Classic. This tournament is considered an individual tournament as opposed to a dual tournament so wrestlers will individually have to earn points for their team.

Coach Coleman is excited for the opportunity and is ready to see how his wrestlers will respond to the challenges faced in the tournament.

“This will be a double elimination tournament, which means if you lose two matches before the championship rounds, you are eliminated from competing for medals,” said Coleman. “Trophies will be awarded to the top two teams that collect the most points and individuals who place 1st, 2nd, and 3rd in their weight bracket. Points for the team are as follows: Minor Decision is 3 team points, Major Decision is 4 team points, Technical Fall is 5 team points, and Pins are 6 team points. I would like to see the wrestlers that get the opportunity to start this weekend, place in their individual bracket. We have done well as a team, now let’s see how they can do when they are on their own.”

Outside of being technically sound and physical during their competitions, Coleman has especially been impressed with the team’s unity and willingness to compete in practice.

“I have been very impressed with the team’s comradery, leadership, and worth ethic,” said Coleman. “I have athletes that show up to practice and give 100% effort in getting better at this sport, which transfers to the others. I have wrestlers from 8th to 12th grade that make up the team, and it’s impressive to see how they all get along and mesh well with each other. You can find the Freshman getting advice from the Juniors, Sophomores leading the 8th graders, and the Seniors helping not only show the lower classmen, but also eachother what is needed to get the job done. Everyone on the team has a role and a voice. At the conclusion of practice and match we have a team meeting, every wrestler has a chance to ask questions or state what they think, let the others know what is or isn’t working. That is the philosophy that I am bringing to this program. The chance for everyone to excel as far as they can, gain a voice for themselves, and be a part of something that can go beyond just being on the mat.”