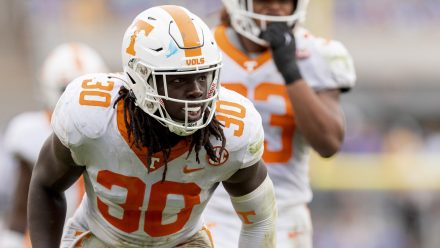 In his final regular season game as a senior at the University of Tennessee, Bainbridge native Roman Harrison earned SEC Defensive Line Player of the Week for his standout performance against Vanderbilt as the Volunteers dominated the Commodores 56-0.

Harrison had an action-packed day defensively as he compiled a season high in tackles with four total tackles, 2.5 solo tackles and a career high in sacks with two sacks on the day. Behind Harrison’s defensive performance, the Volunteers compiled 13 tackles for loss and clinched their first 10 win season since 2003.

In what was a magical season for the Volunteers, Harrison compiled a total of 37 tackles this season with three total sacks as Tennessee went 10-2, finishing second in the SEC East and won big games including a thrilling 52-49 win against Alabama and a dominant win against LSU on the road.

For Harrison, his four years with the Volunteers have displayed his athletic prowess and pass rushing skills that were displayed on Centennial Field before he hit the big stage in Neyland Memorial.

Harrison finishes his career with the Volunteers with eight sacks and 86 total tackles while being a consistent force on the Volunteer defensive line, seeing a good amount of snaps and playing time.

While at Bainbridge High School, Harrison was dominant for the Bearcats during his four year span. Harrison compiled 196 tackles during his career as a Bearcat along with 21 sacks and three fumble recoveries in 37 games played.

His senior campaign in 2018 was one to remember as Harrison filled the stat sheet with 79 tackles and eight and a half sacks. Harrison’s biggest play, however, came on special teams as he blocked a field goal to secure the Bearcats’ first GHSA State Championship Title since 1982.

Although Harrison is a senior, he still has one year of NCAA eligibility left and is likely to return for his final season in 2023 as he did not participate in the senior day festivities during the Volunteers final home game.

After a 2022 to remember for the Volunteers, Harrison aims to help continue to build a winning foundation in Knoxville and have an opportunity to win an SEC Title.