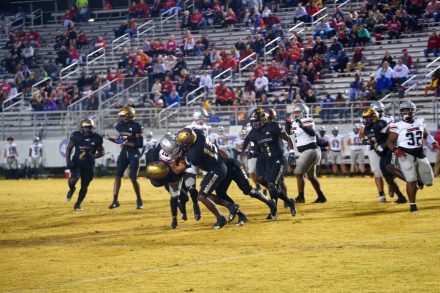 After a thrilling playoff run that saw the Bainbridge High School Bearcats go on a six game winning streak entering the third round, the Bearcats season came to an end Friday night as they were defeated by Cedartown 26-21 in a hard-fought game that came all the way down to the wire.

The game started off with both defenses trading blows and making stops as both defenses forced three and outs to start off the first quarter. After a long 11 play drive by Cedartown, the Bulldogs struck first as running back Harlem Diamond took a 14 yard carry into the end zone as the Bulldogs took a 7-0 lead with three minutes to go in the first.

The Bearcats were quick to respond as they answered with a drive of their own, going seven plays for 73 yards as runs by Keenan Phillips and Antavious Murphy set the Bearcats up deep in the red zone. Bearcats quarterback Bo Smith tied the game up with a two-yard rushing touchdown to even the score at 7-7 with only 30 seconds left in the first quarter.

The Bearcat defense continued to make plays in the second quarter, with their biggest coming just two minutes into the quarter as Donterious Williams sent Centennial Field into a frenzy as he picked up a fumble and returned it 40 yards into the end zone, giving the Bearcats their first lead of the night.

Despite a strong defensive performance from the Bearcats, the rushing attack of the Bulldogs began to take stage in the second and third quarters. Bulldogs running back Patrick Gardner capped off a seven play drive as he sprinted 34 yards into the end zone to pull the bulldogs within one.

However, as the second quarter began to wind down, the Bearcats defense once again saw an opportunity as Antavious Murphy intercepted Reece Tanner’s pass deep in Bearcat territory and took it 68 yards down the field into the end zone for the score. The Bearcats went into halftime with a 21-13 lead as they looked to build off of their momentum.

The Bulldogs, however, began to take control of the game both defensively and with their running game.

Defensively, the Bulldogs did not allow a single point in the entire second half and kept the Bainbridge rushing attack in check as the Bearcats only rushed for 21 yards on 10 attempts. The rushing attack by the Bulldogs, however, was extremely efficient as they combined for 425 rushing yards on 59 carries as a team

The Bearcats offense took the field one last time looking to score the game-winning touchdown but was held in check by the Bulldogs defense as Cedartown closed out a 26-21 road victory over the Bainbridge Bearcats.

Despite a heartbreaking loss, the Bearcats played a tremendous game, especially on the defensive side where they caused two turnovers, returning them for touchdowns and holding the Bulldogs to only one passing completion on the day.

The Bearcats wrapped up 2022 with an incredible eight win season, a region championship and a GHSA Playoffs Quarterfinals berth. After starting the season 2-4, the Bearcats rallied behind head coach Jeff Littleton and saw one of their most successful seasons since the 2018 State Championship.