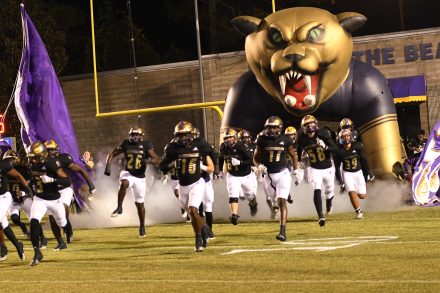 After a dominant shutout victory against Burke County, the Bainbridge Bearcats are headed to the quarterfinals for a highly anticipated matchup against Cedartown High School on Friday, November 25.

Cedartown has revenge on their minds as Bainbridge knocked Cedartown out of the quarterfinals in 2020 in both football and baseball and are sure to bring the energy to Centennial Field on Friday night.

The 2022 season has been nothing short of perfection for the Cedartown Bulldogs, as they come into Friday’s matchup at an impressive 12-0. The Bulldogs have cruised to their first two playoff wins, defeating Cedar Shoals 49-0 in the first round and Stephenson 48-16 in the second round.

The Bearcats certainly have their work cut out for them in Friday’s matchup but if there’s one thing we have learned from the 2022 Bearcats is their dedication to preparation. Despite a holiday week, Coach Littleton and his players are focused on Cedartown.

“We’re used to doing this and playing games during the holidays,” said Littleton. “Our seniors have done it three times. I told them in the huddle after the game, they know the standard. Our coaches push them everyday to get better and they push themselves to get better. It’s part of the process and our kids live it.”

The Bearcats main focus will be on stopping Cedartown running back Harlem Diamond. Diamond has had an incredible 2022 season, rushing for 1016 yards and 26 touchdowns, putting him at one of the top running backs in 4A.

Running back Keenan Phillips is a workhorse just like Diamond, scoring 23 total touchdowns this season with 1161 total yards. In Friday’s playoff game against Burke County, Phillips was the Bearcats workhorse on offense, running for 144 yards and four total touchdowns, including a 70 yard touchdown scamper to open the third quarter.

Limiting turnovers, fundamental tackling and generating the run game are the keys to victory for the Bearcats as they look to reach the semifinals for the first time since 2020.