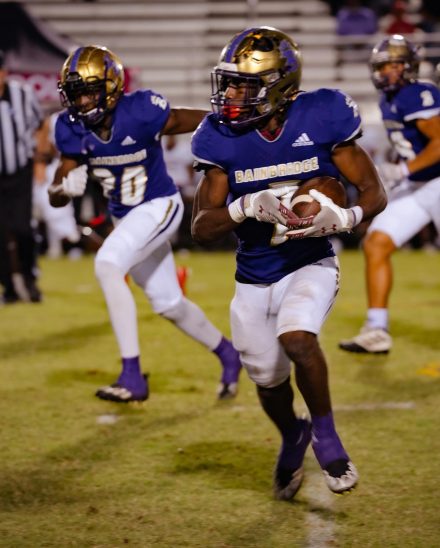 As the Bainbridge Bearcats cruised to a 58-20 win at home against Baldwin High School in Friday night’s opening round of the GHSA playoffs, the Bearcats next challenge lies ahead as they prepare for the Burke County Bears on Friday, November 18. Although the Bearcats have won five straight and six of their last nine games, Burke County poses an intriguing matchup for the Bearcats.

Burke County comes into Friday’s matchup with an impressive 9-2 record, with their two losses coming from fellow one seeds Benidictine and Wayne County. Burke County’s most impressive win came against Islands high school where they won in a 63-0 shutout. The Bears were equally impressive in their first playoff game, taking down a powerful LaGrange high school team 23-20.

Like the Bearcats, Burke County has found great success in running the ball. In their playoff win against LaGrange, the Bears rushed the ball 52 total times for 254 total yards and three touchdowns.

Senior quarterback Marshall Flowers is an extremely experienced signal-caller and has seen production in 2022 throwing for 1400 yards and nine touchdowns.

The Bearcats will once again look to use their heavy dose of rushing on offense as Keenan Phillips leads the Bearcats in total yards and touchdowns. Something the Bearcats are also excited for is the return of running back Travious Freeman who will be returning from injury on Friday after suffering an ankle injury against Hardaway.

The second round matchup between the Bainbridge Bearcats and the Burke County Bears is setting up to be an incredible game that fans of both sides should be excited about. Kickoff on Friday November 18 is set for 7:30 p.m. at Centennial Field.