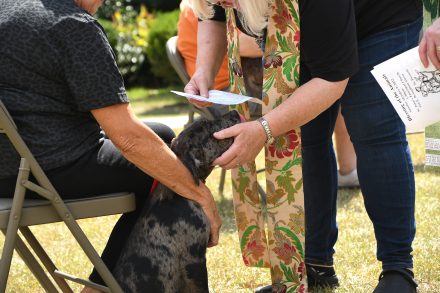 St. John’s Episcopal Church held their Blessing of the Animals ceremony, which is held in honor of Saint Francis of Assisi, Patron Saint of Animals.

Animals hold significance in every religion, whether it be a symbolic association with a deity, certain species that are considered sacred, and some that are considered sacrificial. Christian denominations are no different, whether it be revering the dove as a symbol of the Holy Spirit or vilifying snakes as personifications of the Devil. One notable Christian figure that has a strong association with animals is Saint Francis of Assisi, who is considered the patron saint of animals and the environment. A common religious service observed in his honor is the Blessing of the Animals, with St. John’s Episcopal Church holding their own service this past Sunday.

Several pet owners brought their furry four-legged friends out for the ceremony. According to St. John’s the Very Reverend Leslie Dellenbarger, the church has been performing these ceremonies for years before she arrived in 1998. “Typically all Episcopals do,” she said, in regards to the event, “and I know Melissa and I have talked about having a joint blessing session, and she joined last year so other denominations other than Episcopalians could be with us.” Rev. Dellenbarger was referring to Rev. Melissa Traver from First United Methodist Church, who also joined in performing last year’s blessing as well.

“I am just so excited every year when this comes around,” she concluded. “I think it’s a wonderful service, and a meaningful service. I’m just glad that those that are able to can come and attend, and hope that next year, that those that were unable this year, we’ll see them next year.”