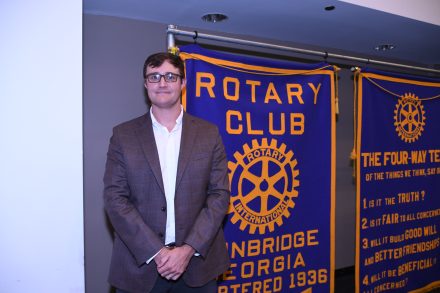 Henry Jackson discussed the workings and purpose of the Flint Riverkeepers on Tuesday.

Members of the Bainbridge Rotary Club gathered again at the Kirbo Center for their weekly meeting. This weeks’ speaker was Henry Jackson, director of outreach and development for the Flint Riverkeeper.

Jackson briefly spoke on how he became involved in the Riverkeeper, before moving on to discussing the river itself. He began with how the river was affected by the Hartsfield-Jackson Atlanta International Airport.

“When the airport expanded in the 50s to accommodate the big jets, they took this swamp, filled it in and paved over it with tarmac,” he said. “Well that swamp was the headwater of the Flint River.” He went on to discuss affects the Riverkeepers contend the airport has on the Flint, including spills of jet fuel, deicing fluid and sewage.

The Riverkeepers are just one part of the larger umbrella organization called the Waterkeeper Alliance. “Each Keeper organization has a Keeper, a job title of the Riverkeeper, the Baykeeper, whatever,” Jackson said, “and Gordon Rogers is our Riverkeeper.” The Riverkeeper is a 501(c)(3) non-profit, depending on grants, donations from the public, and funding raised through special events.

“What it means to have a Riverkeeper is that no one is above Gordon. Gordon sets the policy that the entire organization follows and implements, including the board of directors,” Jackson explained. “If the board of directors wants to influence the Riverkeeper’s policy, they have to fire the Riverkeeper and hire a new one… That’s how this model works, when you boil it down, this one person is the voice for what is right for the Flint River. And that one person has to be above any sort of pressure or manipulation or anything form the board, the staff, the community, whatever.”

Issues facing the headwaters the Riverkeepers are looking into includes increased urbanization and expansion, which according to Jackson, is “filling the river with dirt and mud, that is extremely destructive to the fall line, but eventually settles here in the lake.” The Riverkeepers currently have an active lawsuit under the Clean Water Act against a development in Peachtree City due to this sediment run-off.

Next discussed was the fall line. “The fall line is a geographic feature, it’s the separation of the piedmont and the Coastal Plain,” he explained. “Essentially, 100 million years ago, it was the ancient seashore before the ocean receded, and south Georgia, South Alabama and Florida was exposed as a landmass.” He elaborated on how special the area is, saying, “… it’s the only section of river fall line habitat that has escaped being damned.” This portion of the river, with it’s shoal bass and lilies, the Riverkeepers contend, will be polluted and muddied with excess sediment and runoff from developments.

He concluded by taking questions from the audience.