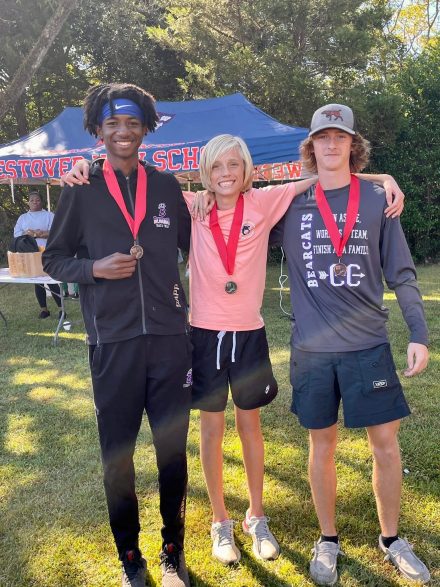 Cross Country had a weekend to remember in Albany this past weekend as Bainbridge High School and Grace Christian Academy runners competed in Westover over the weekend. Not only was the Bainbridge community represented in the leaderboards, many runners reached personal bests.

One of those runners was GCA freshman Walker Elrod. Elrod not only saw a first place finish among all of the boys varsity 5k runners, but Elrod did so with a personal best time of 16:47 which has been a goal of his since the start of the season.

“Not only did he hit his PR and goal of sub 17 but did so with strength,” said GCA Head Coach Elizabeth Simmons. “He ran a great race Saturday morning. Gave it his best and it showed in his time. I am so very proud of him as it all came together for him that morning. I believe his passion for the sport is what keeps him steady and coming back for more, setting new goals and working hard to meet them.”

Along with Elrod, BHS runners Jahlae Sapp and Caden Godwin saw top five finishes as Godwin set his new PR with a time of 18:07.

For the runners, the course in Albany was one where they really had to pay attention to footing and stability, but the morning conditions were nothing short of perfect. Coach Simmons is especially proud of the way that her runners adapted to the course and brought the energy for each one of their teammates.

“I am encouraged and proud of the work these athletes have put in,” said Simmons. “The morning was crisp and clear and so nice for a run. The course was 2 loops and they ran through a pecan grove, so they had to watch their footing and pay attention to the hard dry ground.”

GCA runners Owen Earnest and Keith Edison also hit goals that they set for themselves before the race. Simmons was not only proud of the way they competed but also with how they supported their teammates.

“Two of our runners also came in with sub 21 as a goal,” said Simmons. “Owen Earnest came in at 20:34 and Keith Eidson ran a 20:57. So, they set goals and met them all the while cheering their teammates in. Co-Captain Jay Lanier has really seen some good times this year. He has shaved off two minutes from the start of the season and is now approaching the 21 minute time.”

Most importantly, Simmons is seeing her runners develop before her eyes and seeing them gain confidence each meet. With a group that features runners who have never competed in an organized meet before the season, being able to develop confidence is a great advantage for the future of the GCA Cross Country program.

Up next for the runners is the Bearcat Invitational hosted by Bainbridge High School this Saturday Oct. 8.