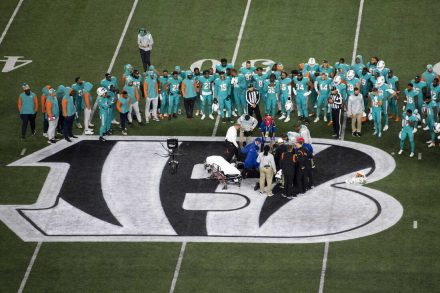 Teammates gather around Miami Dolphins quarterback Tua Tagovailoa (1) after an injury during the first half of an NFL football game against the Cincinnati Bengals, Thursday, Sept. 29, 2022, in Cincinnati. (AP Photo/Emilee Chinn)

Football season is an exciting time of the year for many reasons. From teams with big hopes and aspirations to fans across the country who bleed for their team to players trying to make a name for themselves; football season is a time of opportunity and hope.

However, the football world has been a place of fear and a place of unknown the last 10 days as player safety and concussion protocol by the NFL and all 32 teams have come into question. The national media, NFL fans and current and former players are all calling for change and clarity after the Tua Tagovailoa injury.

On Sunday Sept. 25 the Miami Dolphins quarterback was tackled hard by Buffalo Bills defenders and the back of his helmet slammed into the turf. Tagovailoa got up and immediately started wobbling and then fell to the ground shortly after getting up which according to some, is a sign of a serious head and neck injury.

The Dolphins quarterback was immediately taken to the locker room to undergo the NFL concussion protocol and just 30 minutes later returned to the field where he helped his team win a huge division game against the 2-0 Buffalo Bills at the time.

After the game, Dolphins team physicians and neurotrauma consultants confirmed that Tua was cleared to go back into the game and attributed the wobbling and shaking in his legs to a back injury Tua had suffered earlier in the game.

The situation went from scary to an absolute nightmare on Thursday night on national television as Tagovailoa was slammed to the ground by Cincinnati Bengals defensive lineman Josh Tupou who is a 6-foot-3, 300 pound athlete who towers over Tagovailoa in size.

Tagovailoa layed on the ground as his fingers awkwardly clenched and the crowd came to a dead silence. Tagovailoa was on the ground for a few minutes as he was eventually carted off and immediately taken to a nearby hospital in Cincinnati.

Although the game went on, all that everyone could think about was the health and safety of not only Tagovailoa, but football players across America.

Many analysts and fans believe that Dolphins personnel violated the NFL concussion protocol and want the NFL to do more to ensure the safety of not only the league, but for the sport of football as a whole.

The NFL concussion protocol states that if a player exhibits any symptoms, no matter how mild or severe, that player must be taken out of the game and taken to the locker room for evaluation by an unaffiliated neurological consultant.

In the case of Tagovailoa, many people fear that he was forced and rushed back into the game because of how big the game was for the Dolphins.

Since the injury, the NFL has launched an investigation into the Dolphins organization and has fired the team physicians and neurological consultants for the team.

In my opinion, that alone is not enough. There needs to be a better way for the league to really make sure that each team is following the process correctly and not rushing players back into the game just because they need a win.

What the NFL does is the standard for the sport. The more serious they address protocols and concussions, the better it will be for youth and high school football programs to follow in their process and make the sport safer as a whole.

ESPN analyst and former New England Patriots linebacker Rob Ninkovich was very outspoken on ESPN’s morning show “GET UP” as he expressed his thoughts on the situation.

“The NFL has to do a better job in knowing what to do when they see someone get injured the way that Tua got injured,” said Ninkovich. “You don’t see someone get up, shake their head to get the cobwebs out, start to run and fall over again from a back injury. It was clearly a head injury and you could see that four days later when you saw him lying lifeless on the ground.”

Not only is there a football side to the story, there is the human side and aspect. Many fans are parents, brothers, and friends to football players. To see someone injured in the manner that Tagovailoa was injured makes fans second guess if they want their kids to play tackle football. Is it too dangerous now?

“It’s a bad look for the NFL,” said Ninkovich. “I have children and when you watch that, you don’t want your kid to play football at all. You see all these commercials about player safety and new technology and helmets and the future of the game; but how do you protect the player on the field?”

Ninkovich is very close to this subject as he was teammates with linebacker Junior Seau who committed suicide in 2012 and was later discovered to have a brain disease that came from concussions and head trauma.

I think the NFL will be fine and will do the right thing and institute more and better protocols to ensure player safety. Yes these moments are avoidable and sad, but in the last ten years the progress the NFL has made with player safety has been tremendous.