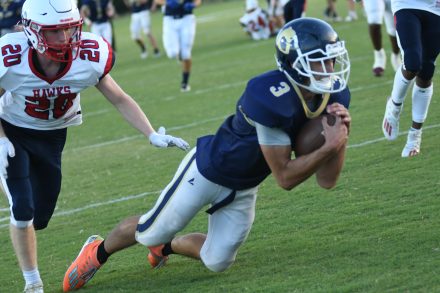 The GCA Cougars football team put the finishing touches on homecoming week as they dominated Harvester Chrstian Academy 40-14 for their second win of the season. The Cougars win saw a sharp offense and aggressive defensive play as they had a fully healthy squad for the first time this season.

To open the game the GCA defense set the tone as they forced a crucial three and out to start as their defense proved to be stingy all night long.

The Cougar offense opened the scoring at the end of the first quarter as quarterback Hayden Cohen executed a drive that lasted over six minutes long and ended with a Jafus Ferguson rushing touchdown, giving the Cougars a 6-0 lead after the first.

Harvester Christian Academy responded on their next drive as they evened the score with a quick five play drive and punched it in the end zone to start the second quarter. The Cougars team was never rattled as the offense continued to efficiently move the ball with both their running backs and wide receivers.

Ferguson added another rushing touchdown as the Cougars responded and regained the lead in the second quarter.

Jafus Ferguson was the spark on the offensive side of the ball as he found the end zone three times in the first half and led the team in rushing.

Before halftime, senior wide receiver Kevin Brooks made the play of the game as Hayden Cohen connected with him for a 18-yard touchdown reception on fourth down as Brooks made an outstanding diving catch to give the Cougars a 27-14 lead heading into halftime.

At halftime, GCA introduced the homecoming court consiting of freshman Lanie Gay, sophomore Grier Albritton, junior Ella Grace Straughn, and seniors Hannah Friedman, Katherine Griffin, and Mallorie Jordan. The court was dawned in their best dresses as they were accompanied by their fathers at midfield.

Senior Hannah Friedman was crowned Homecoming queen as the Buddy and Roy Adams sports complex was packed with GCA faithful to see the ceremony.

In the second half, the GCA Cougar defense pitched a shutout and the offense capitalized off of turnovers and field position. Cohen found Kevin Brooks again for their second touchdown connection of the night and CoCo McKay added a touchdown of his own as he took an end-around to the end zone as the Cougars took a 40-14 lead in the fourth quarter.

A late interception by Graham Backham sealed the win for the Cougars as they gave their fans something to be excited about on homecoming weekend. Head Coach Lance Godwin was especially pleased with the way his team responded from last weeks loss and practiced hard during the week. His players were focused on getting a win for homecoming and it showed in their performance on Friday.

“Offensively we executed everything we went over in practice and all my starters were back healthy which is huge,” said Godwin. “This was the first game where we really had everyone available. Being able to come away with a win on homecoming night was special. I’m really proud of these guys and the way they’ve worked the past few weeks.”

The Cougars next game will come on Friday Oct. 14 as they travel to Woodbury to take on Flint River Academy at 7:30p.m.