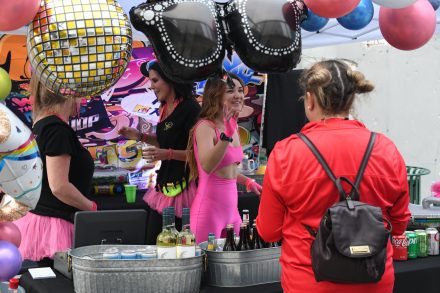 The community gathered at The Hook & Ladder Thursday to enjoy a blast from the past full of neon highlights.

The Bainbridge community ganged up for a gnarly 80s throwback at the Hook & Ladder Thursday night, as Jennifer Cannon hosted her Block party on Broad. The event was to celebrate the three-year anniversary of J. Christine Esthetique, the one-year anniversary of the Elysian Tea Room and Emporium, and the grand opening of Food Trucks on Broad.

Attendees had the choice of food from KT’s Crab Shack or Kitchen South, while Sio’s offered drinks; The Elysian was also open later that evening. The evening’s entertainment was provided by Electric Avenue- The 80s MTV Experience, who sang covers of several hit 80s songs. There was also an 80s costume contest and dance off as well.

When asked about the choice of theme, Cannon said the band came first: “I reached out to several different bands, and I just liked their music, and since they’re an 80s cover band, we went with an 80s theme.” She elaborated, “I wanted different music than what’s been Downtown to draw a different age range.”

“We wanted to throw a fun event to celebrate the openings of our businesses, and this was a great free event,” Cannon said. “Thank you to everyone who supported our businesses, this was our way of giving back.” Cannon also thanked her sponsors, who, aside from Cannon’s businesses, include The Willis Park Hotel, Café Sinclair, First Port City Bank, Sio’s, First National Bank, Bond Management LLC, 1ElevenFitness, Kitchen South, The Farmer’s Wife, and Linens and Pearls.

Based off estimates from food truck sales, roughly 500 people attended over the course of the evening. “I’m just grateful to the public,” Cannon concluded, “it was a well-attended event.”