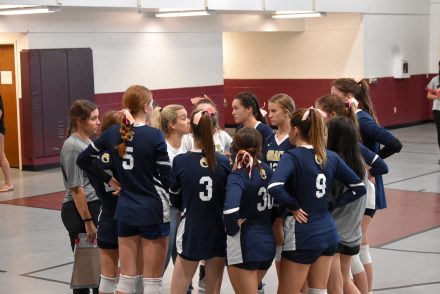 The GCA Lady Cougars volleyball team wrapped up their regular season in Valdosta as they competed in the region tournament this past weekend. The Lady Cougars squad finished the weekend with two wins before falling to Georgia Christian.

The Lady Cougars opened the weekend with a win against Highland Christian Academy but were unable to sustain momentum as they went into their game against Georgia Christian. Head Coach Kelsey Harrell was proud of the way her team competed but also knows that they left opportunities on the table and can compete even better.

“We did not execute well offensively or defensively in the game that we lost,” said Harrell. “I think we skillfully matched up well against Georgia Christian, but they definitely played better as a team, played scrappier, and outplayed us Saturday. We executed well in the other two games and can use that as momentum going into state, and we can use the Georgia Christian game as the motivation for how not to play.”

Despite the loss, the Lady Cougars still had plenty of positive plays and saw players like Lauran Roberts and Lanie Gay step up and lead the Lady Cougars throughout the weekend. Coach Harrell was especially impressed with the way her team served and overcame adversity.

“We saw players step up their game and play their best volleyball game this weekend when we needed them,” said Harrell. “Lauran Roberts is one who stepped up and played incredibly. She had 10 kills and 8 blocks throughout the day and brought energy to the team that was needed. Lanie Gay also stepped up Saturday defensively and played aggressively and attentively. She has really developed as a player and we are excited to see what lies in her volleyball future.”

Although the Lady Cougars fell short in their goal of a region championship, having the ability to garner big game experience and pressure situations is a future advantage that the Lady Cougars gained from their trip to Valdosta.

“It is crucial for our team to experience the pressure of big games so that once we are within the state tournament, the jitters and nervousness is out of our system,” said Harrell. “We still have to work on executing under pressure, but they have done a good job this year of playing well under pressure and beating teams. This is going to be very beneficial for our team in the years to come since we are such a young team.”

Next, the Lady Cougars will shift their focus to the state tournament this upcoming weekend as they have one last opportunity to bring a trophy back to Grace Christian Academy. Coach Harrell and her players are focused and ready to ride their momentum into the tournament and are excited to have the opportunity to redeem themselves.

“The state tournament begins next week. My goal is to make it to the final game and bring home a state championship,” said Harrell. “The team has worked toward this goal all season, and we are excited to see what they do next week. Physically we are ready, but we are spending time making sure that they are ready to execute mentally.”