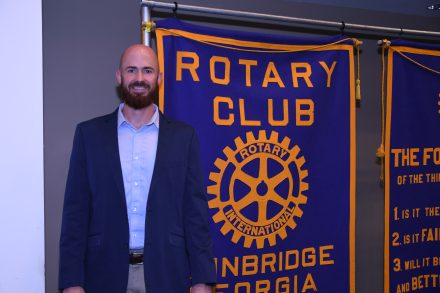 Sean Johnson spoke on the school’s growth, with the school year having a record 351 students enrolled.

The Bainbridge Rotary Club met at the Kirbo Center on Tuesday afternoon for their weekly meeting. This week’s speaker was Sean Johnson, headmaster of Grace Christian Academy, who gave an overview of the school, and an update on their recent expansion projects.

“Of course, if you were to go back 10 years ago and try to predict where Grace Christian Academy would be today, I don’t think any of us could have done that,” Johnson said.

Johnson gave a brief history of GCA. “It began in 1994… with basically a group of families who said they wanted to provide some type of Christian education, where the goal was to partner with families, and discipleship for their kids,” he explained. “It wasn’t to do school better, to do education better, it was that partnership.” The school began in what was, at the time, the Grace Church building. The main school building began construction from 1996-1997, with the Perry Memorial Gym being constructed in 1999.

According to Johnson, Grace’s mission involves addressing the physical, emotional and spiritual needs of children. “We certainly don’t want to focus on one over the other,” he said. Grace is accredited by organizations such as the Georgia Accrediting Commission, the Association of Christian Schools International, and Cognia (formerly known as AdvancEd). “So why does a parent choose to send their child to GCA?” Johnson asked rhetorically. “Obviously I’m a product of Bainbridge High School, public education, and still love Decatur County Schools. So I don’t think any of us think we’re doing school better than Decatur County, and that’s not our goal.” Johnson explained some of the things Grace specialized in, including smaller class sizes and spiritual education.

GCA began this school year with a record 351 students enrolled, as compared to the mere 47 students enrolled when Grace began in ‘94. “We’ve had a pretty large growth, a 50 student growth between last year and this year,” Johnson said. A sign of the school’s growth is the new East campus, located at Calvary Baptist Church, which held it’s official ribbon cutting just this past Friday. “That now houses K3, K4 which you may know as pre-K, and then K5, which is kindergarten. All three of those grades are housed at our East campus, and that’s about 80 students.”

Another expansion is GCA’s new sports complex, which is currently still under construction, though a functional football and baseball field are both up and running. “The field house should be done here in the next couple of weeks… we’ll have locker rooms for the home and away teams, as well as public restrooms. Obviously bleachers are in our long term goals, concession stands, that kind of thing,” Johnson said.

He concluded by taking questions from the audience.