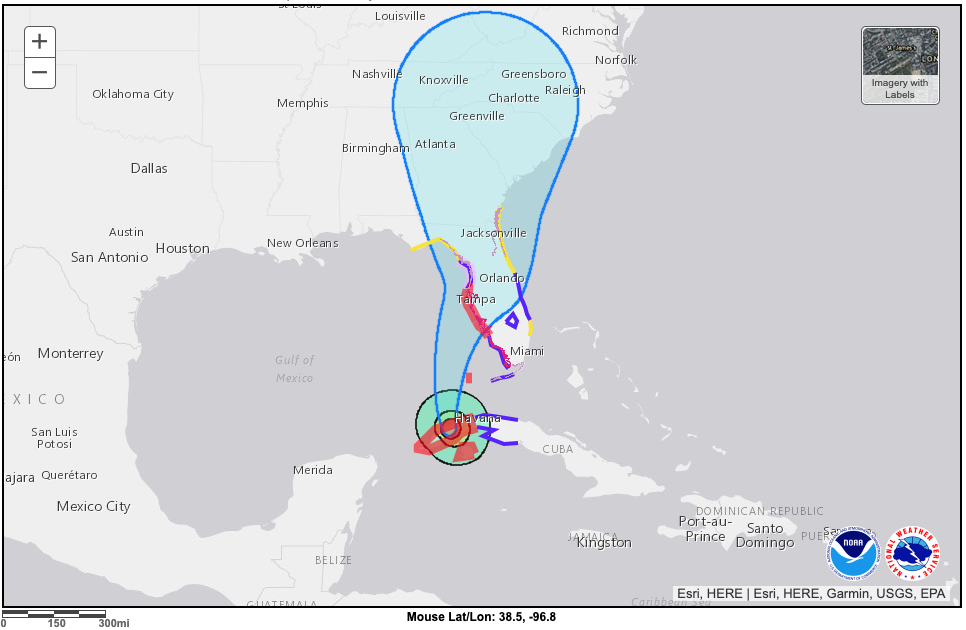 The projected path of Hurricane Ian, as of Tuesday morning. Taken from the National Hurricane Center.

It’s hurricane season again, and right on cue, Hurricane Ian approaches. The storm, as of the writing of this article, has passed over Cuba and has strengthened into a Category 3 storm. The Post-Searchlight reached out to both government officials and a local meteorologist for advice on the storm.

Tyler Dalton, public information officer with Decatur County EMA, spoke with the Post-Searchlight about the measures the local government has been taking to prepare. “We’ve been doing a webinar once a day, until today, and that’s through the National Weather Service,” he said. “Now today they have increased it to twice a day… we’re meeting with all community partners, as far as officials from the city, officials from the county, Board of Education, everybody that the storm could affect.”

According to WCTV meteorologist Josh Green, there is “a good chance of it strengthening to a Category 4.” However, Green also noted that one potential path that would take the storm further north into the Gulf of Mexico would expose it to a cold front, which could weaken it.

Dalton reviewed the safety precautions residents should take, in the event Ian hits the area with significant force. “Like always, we need to make sure that we have plenty of water on hand, bottled water that can be warmed for food as well as drinking water. Make sure we’ve got plenty of canned foods for several days. I don’t anticipate that it would take several days, but you never know with storms,” he said. Other necessities people are encouraged to have include flashlights and batteries, FM/AM radios, and if in possession of a generator, have enough gas. Sand bags are being distributed in the prison parking lot (Butler Fairy Rd., between the prison and the road department.) There is a 10 bag limit per person.

According to Dalton, Decatur County Fire and Rescue is also looking at hiring additional personnel, at least for the next few days of the storm. “We will be posting on the Facebook page of the EMA and the Fire Department,” he stated. “As we get information, we will make sure that information is disseminated out.”

Dalton also encouraged people to remain indoors. “Whenever the storm comes, if the storm does come and there’s trees down, power lines down, please stay home. Please don’t be out on the roads.” He elaborated, “Even if you think you can pass through, it may not be safe, and even though a tree may not have fallen yet, it doesn’t mean it won’t fall, and we really don’t want to have to try and get to people that are trapped in vehicles, because that does happen.” Dalton encouraged people who may have a tree or power line fall on or around their house to contact 9-1-1.

Green concluded by saying that, “Now is the time to prepare, not panic.”