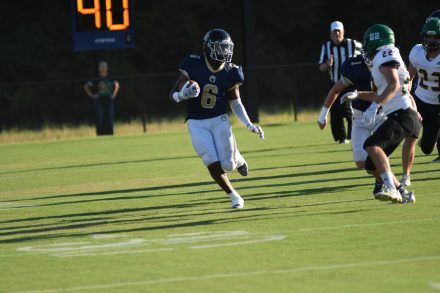 The GCA Cougars played in front of their fans in their new sports complex for the first time under the lights this past Friday as they took on Rock Springs Christian Academy. Despite suffering a 20-6 loss, the Cougars team showed continued development and aggressive defensive play.

The defense opened the game with a fast start as they forced the Rock Springs Christian Eagles to punt as Landon Temples, John Crews and Pate Beckham pushed through the gap and sacked the quarterback on a huge third down stop.

The Cougars defense continued to shine throughout the first half as they pitched a shutout up until the last minute of the half as the Eagles pushed in a touchdown with 52 seconds remaining.

Head Coach Lance Godwin was pleased with the way his defense has progressed throughout the season and hopes to continue to see them perform at a high level.

“We had a really stellar defense performance. I was really pleased with the way that these guys came out and fought,” said Godwin. “Our defense was really fired up and you saw that in the first half. There are still things we need to get back and work on and improve on but I like the direction that the defense is heading.”

Offensively, the Cougars were able to break some big plays and drive the ball down the field, but accumulated over 100 yards in penalties which ultimately was the downfall of the Cougars.

The Cougars have a plethora of young playmakers that really started to gain comfort and break some big plays on Friday night. Hayden Cohen found Corin McKay for a stellar 17-yard catch on the sideline to give the Cougars a first down in the first half.

The running backs also found holes and broke some big plays on Friday night. Running back Preston Barnett alongside Jafus Ferguson each picked up multiple first down runs and led the team in positive yardage plays.

At the end of the game, an interception by Kevin Brooks gave the Cougars momentum as quarterback Hayden Cohen was able to rush for a touchdown with ten seconds left, putting the Cougars on the board.

“Offensively we moved the ball great and had some big plays but over 120 yards in penalties kills drives,” said Godwin. “I was proud of the way these boys fought and put it together on the touchdown drive. We’re young and learning and that’s all you can ask out of these guys.”

The Cougars are back at home Friday as they take on Harvester Christian Academy at 7:30p.m.