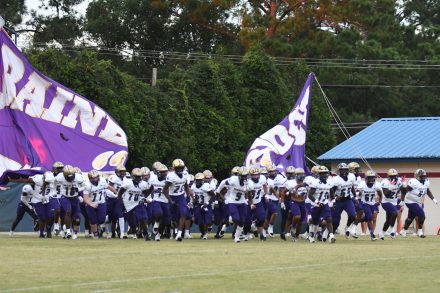 The Bainbridge Bearcats suffered their fourth loss of the season on Friday in a hard fought 22-16 defeat at Ware County. This win puts the Bearcats at a 2-4 record overall as they go into their first bye week and begin region play.

Going into Friday’s matchup, the Bearcats took on an undefeated Ware County team in Waycross that is full of playmakers. Bearcats quarterback Bo Smith also made his return from injury on Friday as he put together 22 completions for 160 yards.

The Bearcats opened up with a strong first half as Bo Smith led the Bearcats on a 19 play 85 yard scoring drive which resulted in a Keenan Phillips rushing touchdown, giving the Bearcats a 7-0 lead out of the gate.

Just shortly after, linebacker Dontavious Broadnax made the play of the game for the Bearcats as he picked off Nickao Smith’s pass and returned it 42 yards for the Touchdown, giving the Bearcats a 16-0 lead. This was Broadnax’s second pick-six of the season as he continues to be a force on the defensive side of the ball, causing turnovers each game.

However, just before the end of the first half, the Ware County offense began to find their stride as Nickao Smith connected with wide receiver Jarvis Hayes for a 17-yard score as Smith ran in the two-point conversion, making it a 16-8 game going into halftime.

The Ware County offense picked up right where they left off in the second half, scoring on the first play of their drive as Smith found running back Dae’jeaun Dennis for a 62-yard score as the Bearcats lead was cut to just two.

In the fourth quarter, Ware County took the lead for good as Smith led the offense down into Bearcat territory with Charles Johnson punching in a one-yard touchdown and Jarvis Hayes converting on the two point conversion, giving Ware County a 22-16 lead which they would not relinquish.

The Bearcats will have the next week off as they will be able to replenish their bodies and come back ready for region play. The Bearcats open region play at home on Friday, October 7 as they take on Westover at Centennial Field.