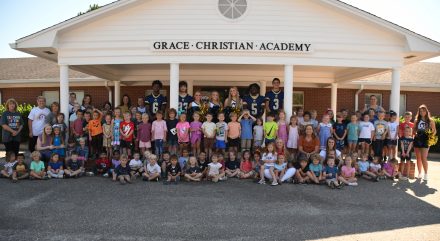 The GCA pre-school classes pose for the camera, along with their teachers and the GCA football and cheer teams.

A small crowd gathered at Calvary Baptist Church Friday morning for a ribbon-cutting ceremony, this time commemorating Grace Christian Academy’s East Campus. The campus, which is actually one of the church buildings, is comprised of grades K-3 to K-5.

“We want to remember and thank all the many individuals who have helped pave the way for the continued growth of Grace Christian Academy,” said Dr. Carol Widner, GCA preschool director. “Grace School began with a total enrollment of 47 students in grades 5 through 9. Today, our enrollment stands at 351 students in grades K-3 through 12.”

GCA headmaster Sean Johnson spoke at the event as well, saying, “This began a little over a year ago, and our board and the current administration at that time really just had an ear to what God was saying, that GCA was growing, and we were outgrowing the rate that we had.” He jokingly added, “I do want to thank our board… and I especially want to thank Mrs. Cile Warr, who’s here, and Mrs. Joan Shiver. They’ve both gone on to a better place, and that’s retirement!”

Chamber president Lauren Minor spoke to close out the event. “I say this at every ribbon cutting, and to us, we’re just here and there’s a ribbon that’s going to be cut. But it’s so much more than that,” she said, “this is a lot of hard work that’s coming to fruition… this is dreams coming true, this is more families being able to come up and have this sort of education.” She continued, “We really want to drive that point home, that this is a special day for Grace Christian Academy. But not only for Grace, for our community as well. When you think of it from a Chamber perspective, our goal is to see our economy grow, and what better way than to mark the second location of another school opening here.”

Johnson spoke more to the Post-Searchlight about the process of getting the school started. “The initial conversations began a year ago, this past summer, just with the conversation of ‘We’re growing faster than we have space,’ and I guess just by God’s plan, some conversations happened between Calvary Baptist Church and Grace Christian Academy,” he said. “We found out that this building had not been used for years, and so actual planning began last fall. It took most of the fall and into late January, early February to get it ready for opening.” For the foreseeable future, the East Campus will remain as simply a preschool for grades K3 to K5. “We’re just thankful for all the people who made this possible, and ultimately give glory to God that He’s seen us through and that we’re doing His plan.”

Widner, who had been over preschool at the original GCA campus, spoke on the move over. “It’s actually surprisingly quiet… when they come out in the hall and use the restroom, line up to leave or go wherever they’re going it gets a little loud, but it’s not bad, it’s a pleasant noise.” She closed with saying, “I think that God has blessed us with this facility, and I’m so happy for this age group of children to have their own space.”