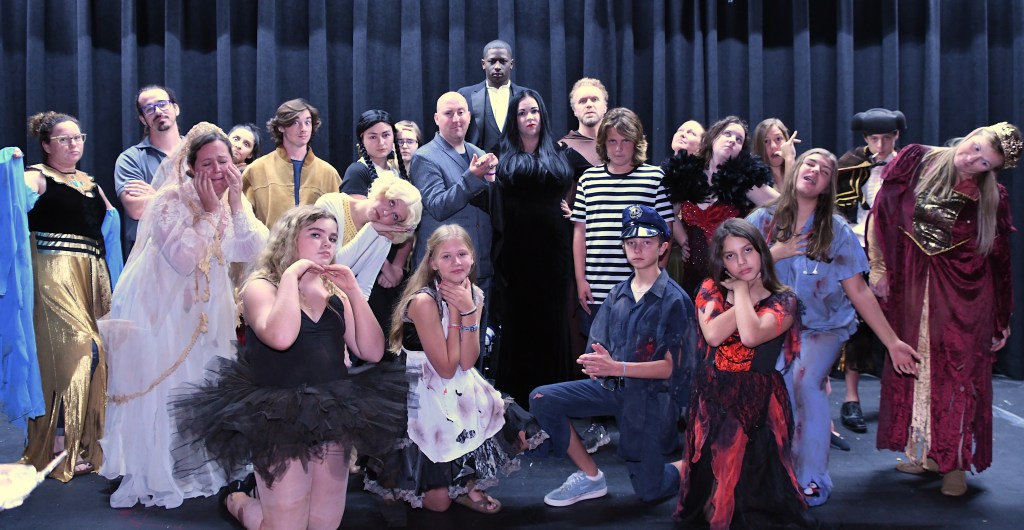 The cast of The Addams Family Musical strikes a pose during practice. Opening night is Thursday, September 29.

They’re creepy and they’re kooky, and they’re paying Bainbridge a visit soon. That’s right, the Bainbridge Little Theatre is preparing for a performance of “The Addam’s Family Musical” later this month.

Krystal Apke, marketing chair at the Bainbridge Little Theatre, spoke with the Post-Searchlight about the production. “Auditions were August 4, so we started that following Monday, so this is eight weeks of rehearsals,” she explained. “So we still have a few things to learn, we’re still working on our last song and our last scene.”

While some of the actors are locals, some have come from all over the place. “Some of the kids are from Grace, we have kids from SCCA, we have kids from Bainbridge Middle and Bainbridge High School,” Apke said, “And then a lot of our adults, this is like their first or second show with us, so we have people from Cairo, Whigham, so it’s kind of cool, because we have people from all over.”

Joshua Apke portrays Gomez Addams, and commented on the oddball nature of the play and characters. “I actually think it’s more fun to be like kooky and kind of weird, because sometimes when you’re playing more serious characters, it’s harder to get into character, and I think for this, everyone has an easier time, because we have a lot of laughs.”

Rachael Herendeen, who portrays Morticia Addams, seems to have the inverse problem. “This is a hard one, because there’s a lot of laughs in it, and for me, my character is very, very serious, does not smile, doesn’t know how to smile, and so I have to train myself not smile or laugh at certain things, and that’s really difficult. I haven’t quite mastered it yet.”

Alaiya Schuyler portrays Wednesday Addams, has a long history with the Bainbridge Little Theatre. “I’ve been at this theatre since probably third grade. The first play I ever did here was ‘Dear Edwina’, it was a summer production, it was all kids,” she said. According to her, she grew up seeing re-runs of the original “Addams Family” TV show. “So I had always kind of loved the character of Wednesday,” Schuyler said.

Krystal expressed her eagerness for the production, saying, “We’re just really excited, because I feel like the Addams Family is a classic. People grow up and almost every generation has their own version of the Addams Family that they grew up with.”

Other members of the cast include:

Opening night is scheduled for Thursday, September 29, and will run to Sunday October 2, followed by a run the following weekend, from Friday, October 7, to Sunday, October 9. Adult tickets are $18, and children’s tickets are $13. For more information, visit the Bainbridge Little Theatre Facebook page, or the official website, https://www.bainbridgelittletheatre.com/