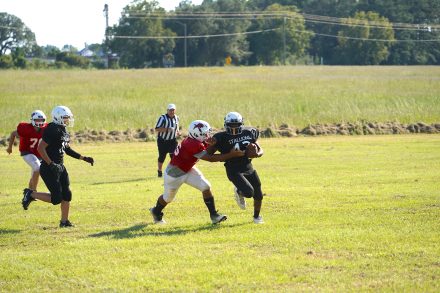 The Spring Creek Charter Academy football program earned their first win in program history on Thursday night as they won a 12-8 thriller. Head Coach Marcus Singletary led the Stallions into their first game of the season with confidence that he instilled into his players.

Being able to not only start a football program, but start with a win is something that Singletary is proud of and credits the players, parents and support he has received for having the opportunity to lead his players.

“This was huge for our school. To play our first game at our school and win sort of sets the tone for the rest of the season,” said Singletary. “This win goes to our football parents. They have been so supportive and have gone above and beyond to help get things together to make playing home games possible.”

Overcoming adversity is something that Singletary has expressed to his players over the past few months and his players showed that in Thursday’s win as they came from behind as Khamryn Vickers scored a touchdown with less than two minutes left, to secure the win.

“We were able to overcome a lot of adversity,” said Singletary. “We were down the whole game and to score with only 2 minutes left in the game shows the character of our team. Our guys never give up no matter the circumstances. “

Earning a win in their first game not only is great for the Spring Creek Charter Academy program as a whole, but instills a stroke of confidence within their players that they can carry with them into the rest of the season.

Most importantly, Coach Singletary wants to build a foundation based upon family and learning that will stick with the Stallion program in years to come.

“We want to build a family atmosphere that works hard,” said Singletary. “I honestly believe good things happen to good people that work hard and that’s our foundation.”

The Stallions will return home next Thursday as they are set to take on Baconton at 6:00 p.m.