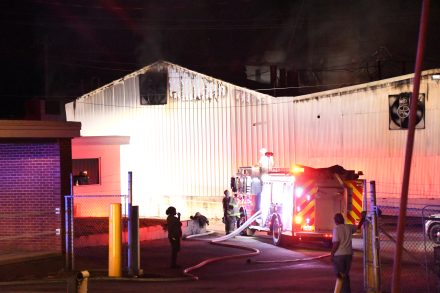 Smoke could be seen billowing in the sky on Friday night as one of Bainbridge’s oldest industries, Elberta Crate and Box Company caught fire.

According to Bainbridge Public Safety Fire Chief Doyle Welch, E911 reported a structure fire at the company at approximately 9:35 p.m.

Welch, along with numerous volunteer fire agencies, including Decatur County Fire and Rescue with personnel from Climax, Attapulgus, Brinson, Blackjack, Faceville, Mount Pleasant, Kendrick and Fowlstown, responded to the call.

The video camera went dead toward the beginning of the fire, but it is believed that the machine that dries the wood once it has been cut was where the fire originated.

“They believe it started at the dry end,” Deen said. “The manager who usually is in charge of that machine had been off for a few days, and the folks who were left there may not have cleaned the machine like it should have been.”

Reportedly, the dry wood got compacted in the machine, causing the fire, but when employees tried to put it out, it exploded.

Deen and Welch believe the explosion was caused by employees opening the door to the machine, letting air in and causing a backdraft.

The air allowed the fire to start running up into the ceiling and smoking up the building. The fire extended into the back of the east building, where it caught live power wires on fire.

According to Welch all of the power lines on the east side of the building that fed into the transformer continued to melt into each other before eventually causing what appeared to be an explosion.

However, it is still an open investigation, due to the video camera losing power. Welch and Deen both intended to revisit the site and continue to review what happened.

While the east side of the building is closed until further notice, Welch said the main power lines for the rest of the plant went live again on Saturday morning, with the business office also opening back up for regular business hours.

Welch is thankful no one was injured during the fire and for all those that responded to the scene, braving nearly three hours of an intense fire.

DCFR Chief Charlie McCann also thanked everyone in a post, stating that it was a true team effort by all and he is thankful for all the agencies within Decatur County, including those who helped ensure the crews were hydrated and cooled off during the task at hand.