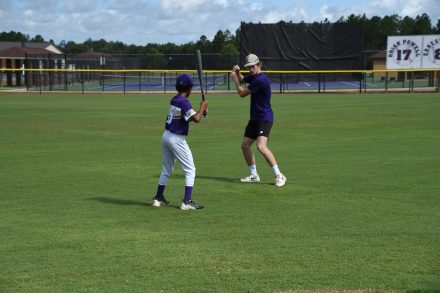 THE PERFECT SWING: A varsity Bearcat works on the fundementals of a swing with a camper.

As kids are trying to soak up the last few days of summer before school comes back in full force, some kids are enjoying it by spending their days on the baseball field as they attend the “Ballin with the Bearcats” baseball camp.

“This is something we like to do every year for our kids,” said Coxwell. “We usually try to host it through the rec authority but this year we did it ourselves and are having it at our high school facilities.”

Each day Coxwell and his players worked with the kids on something new. From hitting soft toss in the batting cages to learning how to backhand ground balls at third base, Coxwell made sure the kids had an action packed two days.

“Even though the kids are young we really try to show them stuff they haven’t learned before so they’re one step ahead as they grow as players,” said Coxwell. “We have some really good young kids out here and each year I’m impressed by the kids that come out.”

Not only is Coxwell impressed by the talent of the campers, but also by their personalities and willingness to learn. With the help of his varsity players, coach Coxwell hopes to not only teach the kids fundamentals but also help them develop a love for baseball and competition.

“Some of the kids out here really look up to our varsity players and want to be a bearcat when they get older,” said Coxwell. “Its part of our job to encourage them and teach them the bearcat way.”

Despite the scorching temperatures, the kids took the field with smiles on their faces eager to learn. The kids especially loved when they had the opportunity to hit on the high school field where they hope to one-day play.

Coxwell plans to host the camp again in 2023 and hopes to have just a good, if not better turnout than this season.