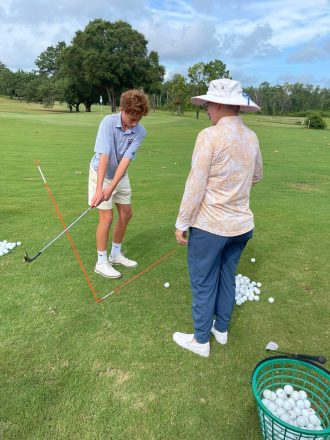 PERFECTING HIS STROKE: Sam Surratt works on his short game while coach Christa Teno looks on.

Even during the offseason, the Bainbridge High School golf team is still working and getting better. Last week, the Bearcat golfers were able to take in lessons and immerse themselves with knowledge about the game of golf as they spent two days with Seminole State College golf coach Christa Teno and one of her players, Alex Giles.

With the help of community members and the Bainbridge Country Club, head golf coach Rex Wade was able to provide his players with this experience.

“We haven’t really done many clinics or lessons like this in the past but a lot of people helped out and got in contact with Christa who came out with Alex and taught our players a lot of great stuff,” said Wade. “It was just good to have our players doing something and have them around golf.”

Coach Wade was very excited to do this clinic for his players because he wants to provide them with as many opportunities he can during the offseason. This was not only a learning experience for the BHS golfers, but for Wade himself.

“I think I learned just as much as the kids did,” said Wade. “Christa and Alex did a number of drills and had a lot of conversations about the mental aspect of golf as well.”

As Teno and Giles ran through a course of drills with the golfers, they also talked to the team about having a competitive mindset when playing golf.

“A lot of the time Christa and Alex talked to our players about the mindset you need when you’re competing,” said Wade. “They talked about everything from approach to the way you think for each and every swing and I think it really engaged and opened our players eyes.”

Wade thought it was impactful for his players to not only hear from another voice, but to hear from voices that have been successful at the next level of golf. Teno has been extremely successful at Seminole State College winning three National Championships.

“I think it was definitely important that they heard from someone else,” said Wade. “A lot of stuff they said was stuff I told the team before but when they hear it from them, it’s like hearing it from a best friend.”

Most importantly, Wade wanted to do this for his players to instill excitement about the sports of golf. Wade is excited about the results about the clinic and hopes this season makes the community of Bainbridge excited about golf.