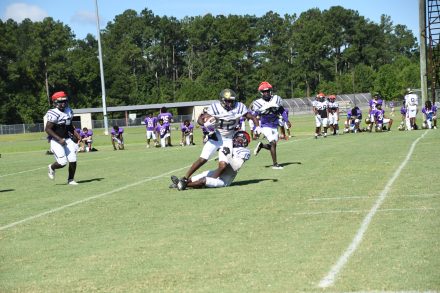 PRACTICE MAKES PERFECT: Defensive Backs working on form tackling as they prepare for the scrimmage on Friday night.

Despite this matchup being a scrimmage, head coach Jeff Littleton and the Bearcats staff is anticipating a game full of competitive energy and physicality. Coach Littleton especially wants to see his players play fast and physical football.

“I really want to see our guys get acclimated to the fast flow of a Friday night game and making sure we’re playing hard,” said Littleton. “In order for us to do that we have to be able to lineup and get set as fast as possible to the point where we’re not thinking about it, we’re just playing.”

Although Crisp County has a new head coach in Lawrence Smith, the Cougars are filled with talent, starting with one of the top prospects in the state of Georgia in Ahmad Brown who can play a variety of positions on offense including quarterback.

Littleton and the Bearcats are excited to face off against the new look team and have different ways of countering their attack on both offense and defense.

This Friday’s scrimmage will also provide the underclassmen with some playing time as the coaching staff plans on rotating everybody in during the course of the game.

“We’re going to roll with the starting group first and then throw some different personnel in there and by the end get some freshmen in there to get some reps and experience,” said Littleton. “This week allows us to not only give everyone reps but also get everyone on film and give us the ability to evaluate them.”

Littleton emphasized the importance of this scrimmage is that it will not only give the team a baseline for where they are at and let his guys face different competition, but will also help them with their conditioning as they prepare to begin the regular season.