The Future of Conferences in College Football 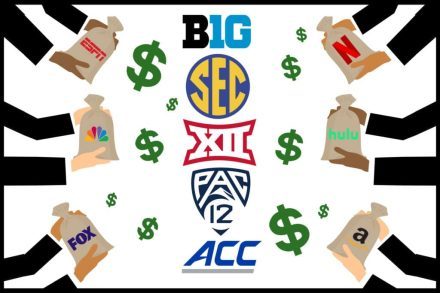 After experiencing one of the most exciting seasons in recent memory, college football is set to undergo major changes in the upcoming future when it comes to conferences.

In the past year Texas and Oklahoma announced their plans to leave the Big 12 and join the SEC as well as USC and UCLA leaving the Pac-12 to join the Big Ten. When it comes to money, these are four of the most prominent programs in college football so what does this mean for the future of conferences in college football?

At first many were confused by the USC and UCLA moves because geographically, Southern California is nowhere near any of the Big Ten teams and in the case of Maryland and Rutgers, are on the complete opposite side of the country. However, this move made complete sense when talking money. The new additions are set to bring in over $26 million in TV revenue.

The notion of “super-conferences” is no longer coffee shop talk, it’s reality. With these recent moves, it brings the SEC and Big Ten to 16 teams. The goal of the two powerhouse conferences is to have potentially 18-20 teams divided into four divisions. Who are some of the next pieces to fall?

Although the SEC leads in revenue and head officials want to stay at 16 teams, schools like Florida State, Miami and Clemson will all be available for new TV deals come 2025 and would make complete sense both geographically and revenue wise for the SEC and Big Ten

These moves significantly hurt the Pac-12. The Pac-12 not only lost their two biggest brands in USC and UCLA but the University of Oregon and Washington already making plans to leave pretty much means the end of the conference.

The Big-12 seems to be holding on, for now, as they gained the top schools from the American Athletic Conference including UCF and the University of Houston and is already in talks with Arizona State, University of Colorado and Utah about a possible move. Although realignment is inevitable, the Pac-12 is still trying to keep up as they are negotiating with the ACC about a joint TV deal with ESPN and a possible championship game in Las Vegas between the two conference winners.