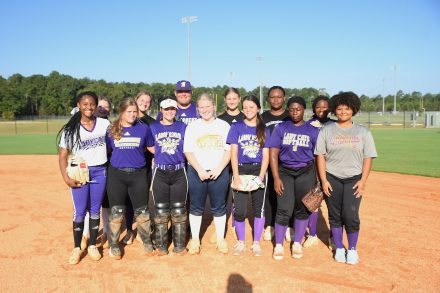 The Lady Cats took to the field Tuesday morning for a practice with new head coach, Rex Wade.

Over the past few years Bearcat fans have become familiar with the dynamic coaching duo of Christopher Bryant and Rex Wade. The two changed the Lady Cats softball program forever, when they led the Lady Cats to the Final Four in 2018.

However, Bryant recently transitioned to co-Athletic Director, leaving the softball program in the hands of Wade.

Wade said he still has the same expectations of the team as he did when he was assistant coach.

“Nothing is really going to change as far as the expectations of the girls and holding them accountable,” Wade said.

Wade will now be assisted by coaches Kevin Toole and Brian Boyett.

The coaches had their first game experience as a team last week, when they played several summer games.

On Tuesday, the Lady Cats faced off against Valdosta and Irwin County.

“It was a 2-2 ballgame, but I had to take our pitcher Brenna (Conley) out, because she had a big game coming up with her travel ball team,” Wade said.

Without Conley’s pitching prowess, the team ended up falling short 3-2.

The Lady Cats returned on Wednesday to face Coffee County and Tift County, but again fell short without their leading pitcher.

“Summer ball is more about giving the younger girls the opportunity to play, though,” Wade explained.

Despite the losses, Wade was happy with what he saw from the younger girls and those returning.

The team is largely returning, with 12 girls who have been on the field before, while three are new.

“We have a larger varsity team before than we’ve had in the past,” Wade said. “I’m super excited to get the opportunity to step up as their head coach. They’ve bought in to me as the head coach and what we are trying to do.”

Wade said the team is different than any he has helped with in the past. He said they take a lot of pride in what they are doing.

“It’s just a joy to have them,” he finished.

Wade thanked all of the local businesses who have supported him as the new head coach and the team during their recent sign sale. He said he looks forward to a great season and encourages everyone to come out and watch the Lady Cats.