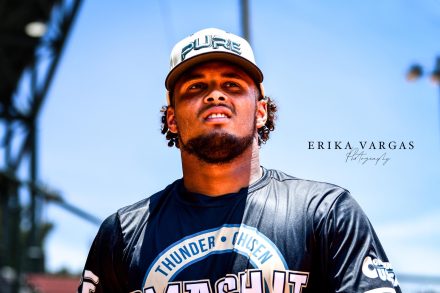 Tyler Story is headed to the majors after joining the competitive softball team, Smash It.

After a successful football and wrestling career at Bainbridge High School, Tyler Storey graduated Bainbridge in 2016 with plans to take his football career to the next step and play at Albany State. After tearing his ACL his football journey came to an end, but Storey still found a way to fulfill his spark of playing competitive sports.

“I never heard of men’s competitive softball before but the hospital I work at has a staff day every year and each unit gets a team together,” said Storey. “The umpire actually had his own competitive team and saw the way I could swing the bat, run and field and I started playing for him and then just kept working my way up to the majors.”

As a football standout at Bainbridge High School, Storey was named Senior Athlete of the Year in 2016 and caught 87 passes for 12 touchdowns and over 1400 yards as a wide receiver.

Despite softball having differences from football and wrestling, playing a sport at a competitive level still gives Storey the experience that playing a sport at a high level brings. Storey is able to use his strength and speed as an advantage both at the plate and on the base path.

“It’s just as serious as any sport,” said Storey. “When you play, everyone is there to win and wants to play their best and compete at a high level.”

During the week Storey has to find time to practice on his own schedule in preparation for a tournament every weekend. Storey has been able to climb the ranks to the majors quickly, but has had to adjust to the difficult task of adjusting to a new team each time he moves up.

“People always expect you to perform,” said Storey. “The hardest part of competitive softball is being able to get those kinds of jitters out and become comfortable with the guys on the team and adjusting to the way they do things.”

In addition to playing competitive softball at the highest level, Storey also plans to graduate nursing school at the end of June and pursue a career in the medical field.