Reddish wins Photo of the Year at GPA 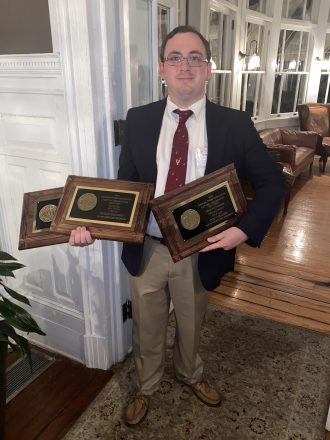 Ethan Reddish smiles with his plaques for Photo of the Year, Feature Photo and News Photo.

Thursday afternoon’s festivities began with members being inducted into the Golden Club.

Following a round of applause, editors and publishers had the option of attending various seminars such as, “Stop Overthinking and Just Do It” and “A Better Way to Tell our Story.” The seminars focused on research about editorial content in the digital age.

Friday evening, the Better Newspaper Contest for the editorial division was held.

The contest began with the announcement of Photograph of the Year.

The photograph of the year is chosen from first-place photography entries from every division, including both weekly and daily newspapers.

This year’s photograph of the year was taken by The Post- Searchlight reporter, Ethan Reddish.

Reddish’s winning photograph was captured during the documentation of Bo the elephant’s arrival at Elephant Refuge North America in Attapulgus.

Reddish was thrilled to receive the award and have his parents in the audience to support him.

“I never expected that picture would win such a big award,” he said. “I would like to thank everyone at The Post- Searchlight for helping me, my parents for all their support and Bo, for being such a photogenic subject.”

Reddish, along with Managing Editor, Jill Holloway went on to win several additional awards throughout the evening.

Reddish took first place in News Photograph, as well as Feature Photograph. Both of these photos were also taken during Bo’s arrival.

She also placed second in Best Magazine Story-original writing. The piece chosen was the one of a kind wedding of Ivy Heard and Brian Merriman.

The Post- Searchlight staff went on to win second place in Magazine Product for Bainbridge-Living and third place for Best Magazine Themed Issued, which was their annual 10 Under 40 Magazine, produced with the Bainbridge/Decatur County Chamber of Commerce.

Holloway and Reddish were both thankful for the opportunity to represent Bainbridge at the annual convention and hope their work will only go up from here.

Holloway and her staff plan to continue providing the stories readers want and enjoy in the coming year.